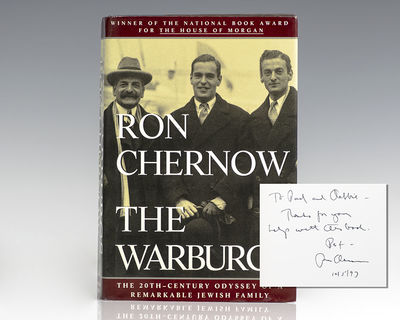 by Chernow, Ron
New York: Random House, 1993. First edition of Ron Chernow's ambitious saga of the Warburg dynasty. Octavo, original half cloth, pictorial endpapers, illustrated. Presentation copy, inscribed by the author in the year of publication, "To Paul and Debbie- Thanks for your help with the book. Best- Ron Chernow 10/5/93." Fine in a fine dust jacket. Jacket design by Andy Carpenter. Ron Chernow's saga traces the fortunes of the influential German-Jewish banking family from its generation of great wealth, stimulated by the Franco-Prussian War, through the family's defamation and degradation by the Nazis, and its subsequent return to Hamburg following World War II. In the United States, family members married and joined forces with the Schiffs and Loebs at the beginning of the century. "This is grand-scale scholarship. . . . It is all here, along with so much of the painful, tumultuous history of our time, all in one splendid book" (David McCullough). (Inventory #: 115721)
$325.00 add to cart or Buy Direct from
Raptis Rare Books
Share this item