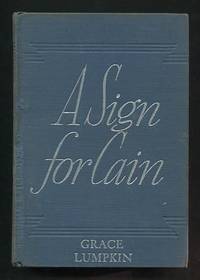 by Lumpkin, Grace
New York: Lee Furman, Inc.. Very Good. (c.1935). First Edition. Hardcover. (no dust jacket) [a bit of fading and light spotting to spine cloth, top rear corner bumped, age-toning to edges of text block; a previous seller has pencilled a longish quotation from Rideout on the ffep]. Radical novel, cited in Rideout, about an African-American communist labor organizer working in the South, here "seen whole: the decadent land-owners, the well-meaning but futile liberals, the industrial slave-drivers and their tools, corrupt judges, sheriffs and 'deputies' -- and the blacks and poor white farmers, finding together, for the first time, a strength and power to fight the new economic slavery." (Quoted from the dust jacket blurb; jacket NOT present on this copy.) The second novel by this Georgia-born author, who was deeply involved with the Communist cause in the 1920s and 1930s -- she was on the staff of The New Masses, and at one point in the late 1920s went South to organize black sharecroppers at the behest of the Party (although she later claimed never to have been an actual member), and participate in the Gastonia textile strikes. She later turned to religion and renounced the Communist ideology. Both Lumpkin's first novel, "To Make My Bread," and her next, "The Wedding," have been reprinted, but this novel, as far as I can see, has remained out of print since 1935 and is accordingly much more difficult to find. Hanna 2248 . (Inventory #: 25755)
$100.00 add to cart Available from ReadInk
Share this item
ReadInk
Offered by

Every Man a King: The Autobiography of Huey P. Long