The Moving Image: The Journal of the Association of Moving Image Archivists (Spring 2010) ["The Itinerant Issue"] 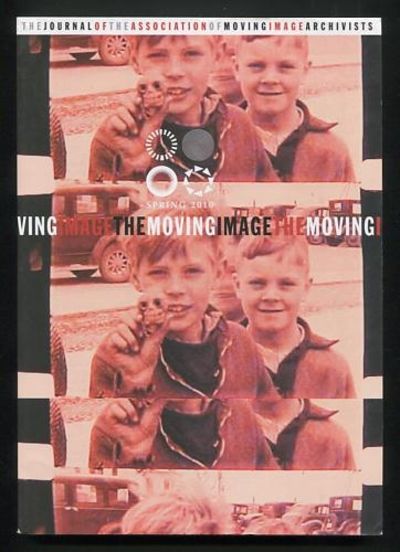 by (Orgeron, Marsha and David, eds.)
Minneapolis: University of Minnesota Press. Near Fine. 2010. (Vol. 8, No. 2). Journal. [essentially as-new, just a teensy bit of wear at lower left corner of front cover, slight bend at top corner of rear cover]. (B&W photographs, facsimiles) A "peer-reviewed journal that explores topics relevant to both the media archivist and the media scholar." In this issue, which is entirely devoted to so-called "itinerant filmmaking," are these articles: "Jackrabbit Genius: Melton Barker, Itinerant Films, and Creating Locality," by Caroline Frick; "The Places You'll Know: From Self-Recognition to Place Recognition in the Local Film," by Martin L. Johnson; "Cuckoo in the Nest: Edwardian Itinerant Exhibition Practices and the Transition to Cinema in the United Kingdom from 1901 to 1906," by Vanessa Toulmin; "Meeting the Movie Queen: An Itinerant Film Anchored in Place," by Karan Sheldon; "Collecting Georgia's Hometown Movies: Acquisition, Ownership, Preservation, and Access," by Margaret A. Compton; "'Wasn't That a Funny Thing that We Did?': Oral Histories of Itinerant Filmmaking," by Dwight Swanson; "The Itinerant Films of Arthur J. Higgins," by Albert Steg; "Itinerant Filmmaking in Knoxville in the 1920s: A Story Told Through Unseen Movies," by Bradley Reeves and Louisa Trott; "The HUNTINGDON'S HERO Story," by Nathan Wagoner. Also: book and film reviews, and an "Itinerant Filmography [of] North America." (The not-so-secret word, Groucho, is "itinerant.") . (Inventory #: 25743)
$50.00 add to cart Available from ReadInk
Share this item
ReadInk
Offered by

Every Man a King: The Autobiography of Huey P. Long

New Orleans : National Book Co., Inc. , (c.1933)
(click for more details about Every Man a King: The Autobiography of Huey P. Long)
View all from this seller>