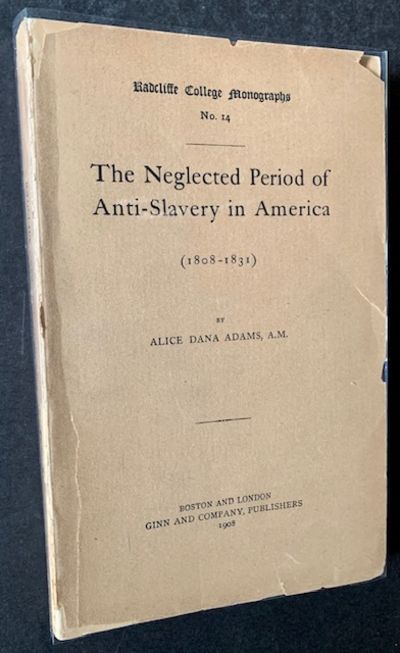 by Alice Dana Adams
Boston: Ginn and Company, 1908. Original wraps. Very Good -. The uncommon 1908 1st edition of this important, against-the-grain argument positing that pre-Civil War opposition to slavery (specifically from 1808 to 1931) was far more entrenched than widely believed. Until this examination, the era had been called the "period of stagnation", in which, it was believed, there was little sophisticated, organized opposition to the institution. Alice Adams's thesis (at Harvard) chips away at these beliefs with an abundance of concrete, thoroughly-researched evidence. The book, while fragile, has help up nicely. Clean and VG- in its printed beige wrappers, with light chipping along the spine and the tips. One 3" closed tear as well running vertically along the front panel. Still though, bright and presentable, and internally very clean, with no writing or markings to speak of. Octavo, #14 in the formidable "Radcliffe College Monographs" series. Sections include "Public Opinion in the South", "Public Opinion in the North", "Attitude of the Churches", "Anti-Slavery Societies", "The American Convention", "Movement of Slaves, and Colonization", "Territorial Questions of Slavery" and "Court Decisions". And, within these sections, there are multiple chapters casting a sharper light on each of these broader subjects. (Inventory #: 18159)
$500.00 add to cart or Buy Direct from Appledore Books
Share this item
Appledore Books
Offered by