Notes on Nursing: What it is, and what it is not (Association copy) 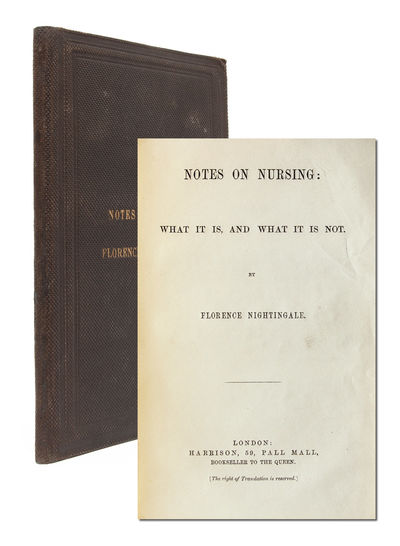 by Nightingale, Florence
London: Harrison, Bookseller to the Queen, 1860. First edition. Early state. Original charcoal medium-fine bead-cloth, stamped in gilt and blind. Yellow advertisement endpapers. Spine and ends discreetly restored (often found thus, as noted by Skretkowicz) and hinges strengthened. Light wear at corners and a few negligible marks to cloth Very faint dampstain to front pastedown, some leaves from gathering B holding at bottom cord only (pages 5-12), occasional notations but overall clean internally. A pleasing copy of this landmark work on nursing, with an intimate association, from the estate of author and politician Richard Monkton Milnes, 1st Baron Houghton (1809-1885), Nightingale's favourite, persistent, but ultimately rejected suitor. Nightingale's landmark treatise on nursing, which introduced new and rigorous standards for sanitary and hygienic treatment of patients in hospitals. It is a work that altered how hospitals approached patient care, saving countless lives from infection. It also helped transform nursing from a volunteer role to a more respected and formalized career path for women. The owner of this copy, Richard Monkton Milnes, "was a family friend from Nightingale's childhood, and her most serious suitor. She turned him down finally after a long courtship, not without some regrets ... Milnes and Nightingale remained friends for life and she made a friend also of his wife" (McDonald). One of Nightingale's most vocal supporters, Milnes was prominent in the fund-raising to honour her work in the Crimean War and supported the establishment of the Nightingale Fund; he served on its Council until ill health forced him to quit, when he was succeeded by his son. Nightingale and Milnes would continue a lively correspondence, predominately on social and political themes. "Nightingale was godmother to one of his daughters [Florence Ellen], who indeed was named after her. The daughters were invited to visit and Nightingale sent them books" (McDonald.). A typed letter from Christie's is tipped-in at the rear of this copy, signed by Inken Handane of the Book Department, confirming it as from the library of a direct descendant of Milnes and sold in their 28 November 1997 sale (part of lot 140). The letter is further annotated in pencil to explicate the connection between Nightingale and Milnes, and also bears the small library label of the historian Hugh Small, author of Florence Nightingale: Avenging Angel (1998). Originally published six months before the opening of the Nightingale School at St Thomas's Hospital in London in June 1860, Notes on Nursing was not intended to be a textbook per se but as a book of hints for those nursing in the hospital ward and in the domestic sick room. Nightingale provides practical descriptions of the nurse's duties in supplying her patient's needs, and "indicated a new and more responsible role for nurses, one that required proper training and medical knowledge" (Hook & Norman, p. 260). Given the considerable number of different states of each inner and outer forme in every sheet, the idea of attempting to establish with certainty any specific 'issue' of Notes on Nursing beyond the first is utterly impractical" (pp. 29-30). This copy corresponds with Skretkowicz's group 11 of the 32 that he distinguishes (in either the a or b subcategory, with the combination of Binding 3, Endpapers 3, and the translation notice). While the earliest endpapers are blank, those subsequent bear printed advertisements, with at least eight distinct settings. The pale yellow endpapers of the present copy are in an early state: in the second setting of type, in the first state. Textually, it has the three main characteristics of group 11 as listed by Skretkowicz, and all of the typographical errors mentioned by Bishop & Goldie. Grolier, One Hundred Books Famous in Medicine, 71. Hook & Norman 1600. Osler 7737. Skretkowicz 24-46. PMM 343. (Inventory #: 3495)
$3,000.00 add to cart or Buy Direct from
Whitmore Rare Books
Share this item