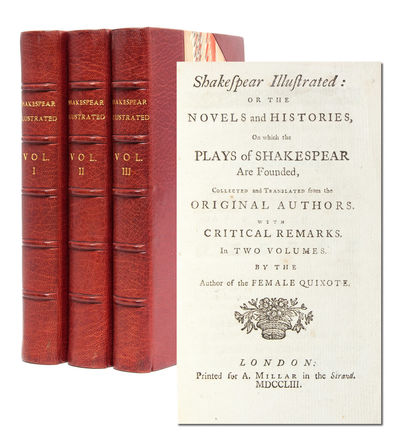 by Lennox, Charlotte
London: Printed for A. Millar, 1754. First Edition. Fine. Volumes 1-2 published in 1753, followed by Volume 3 in 1754. Finely bound by Bayntun in half red crushed morocco over marbled boards. Top edge brightly gilt. Marbled endpapers. An excellent copy internally, with none of the foxing typical of the era. 12mo (pages 160 x 100 mm) collating: xii, [2], 292; [4], 274, [2, adverts]; [4], 308; complete. A pleasing set of this rare work, of which there has been no complete copy at auction in over 35 years. At a time when Voltaire and his literati questioned the artistic value of Shakespeare's works, Charlotte Lennox and her three volume Shakespear Illustrated (1753-1754) carved out space for feminine voices within the debate. Taking Shakespeare to task for what she saw as his debauchery, over-use of source-books, and usurpation of authority from female characters by "taking from them the power and moral independence which older ramnces had given them" (Doody). Lennox became one of the first published female literary critics and she laid the groundwork for other women's involvement with the Bard. Outspoken and detailed, Lennox tackles twenty two of Shakespeare's plays and their sources, and she relies on her own translations of the Italian and French rather than rely on preexisting translations by men. In this sense, Lennox asserted herself as a knowledgeable authority worthy of engaging with figures such as Samuel Johnson and Henry Fielding. And she made it possible for women to influence the creation of the British canon. Feminist Companion 648. ESTC T138281, T139076. Fine. (Inventory #: 3508)
$4,500.00 add to cart or Buy Direct from
Whitmore Rare Books
Share this item