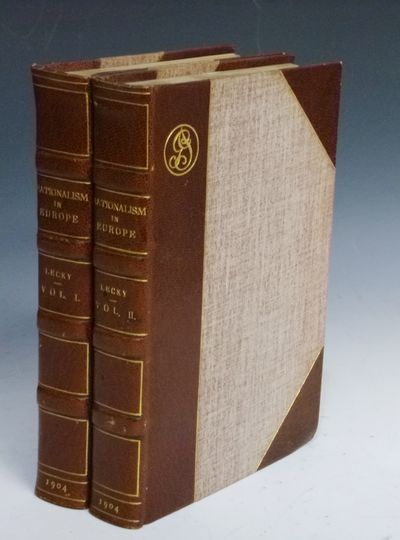 by Lecky, William Edward Hartpole
London: Longmans, Green and Co, 1904. Octavo. In two volumes. Half-titles, xxxi, 408pp and xiii, 430pp. The author attempts to show the distinction between the sphere of the historian and the sphere of the theologian. He traces the history of the spirit of Rationalism. Not any class of definite doctrines or criticisms, but rather a certain cast of thought, or bias of reasoning, which has during the last three centuries gained a marked ascendancy in Europe. The nature of this bias will be exhibited in detail, and when he examines its influence upon the various forms of moral and intellectual development. Chapter one begins on the declining sense of the miraculous, magic and witchcraft. A very nice set bound by Birdsall in 3/4 brown morocco over cloth, raised bands with compartments lettered and rule in gilt, top edges gilt, marbled endpapers, a little foxing to front preliminary leaves otherwise clean and bright. From the library collection of Gwendolen Jefferson with her book plate, along with another owner's name. (Inventory #: 022495)
$175.00 add to cart or Buy Direct from
ALCUIN BOOKS, ABAA
Share this item

The Crossing (limited to 1,000 Signed copies)