A Report on the San Francisco Police Department, Parts I and II 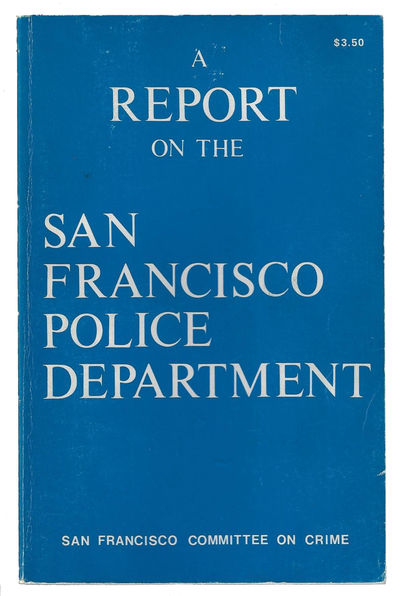 by The San Francisco Committee on Crime
Berkeley and San Francisco: Western Star Press, 1971. Softcover. Very good. Trade paperback, 81 pp. Light handling wear; very good. Describes the research and conclusions of a two-year, grant-funded study of the SFPD that found numerous systemic problems. The Introduction lays out the broad (and familiar) issue quite well: "The claim is heard that police action has become a weapon by which minority groups are oppressed and persecuted, and that police action is often used for political rather than legitimate law enforcement purposes. This belief, justified or unjustified, has become a barrier to effective police work. [T]he police feel themselves isolated and set apart from the rest of the community...Only when a police officer is regarded and can regard himself as just another civilian doing an important and necessary job, a part of the community rather than apart from it, can the police department operate at its best and the community receive the greatest service." The Committee's recommendations include significant changes to recruitment and training procedures, supervision, patrol methods, weapons use and training, written policies and directives, procedures for personnel management and discipline and more. Noting that "previous reports on the San Francisco Police Department have traditionally gathered dust on the shelves," and efforts at change have been viewed with suspicion as "still another attack on law enforcement," the authors plead for the report to be taken as constructive criticism, offered "in the hope of making the San Francisco Police Department an enviable and progressive model of what police should be. (Inventory #: 21111)
$100.00 add to cart or Buy Direct from Walkabout Books
Share this item

Noble Lives of a Noble Race, A Series of Reproductions by the Pupils of St. Mary's, Odanah, Wis

Minneapolis, MN : Brooks Press , 1909
(click for more details about Noble Lives of a Noble Race, A Series of Reproductions by the Pupils of St. Mary's, Odanah, Wis)

The Gold Fish of Gran Chimu

Boston : Lamson, Wolffe, and Company , 1896
(click for more details about The Gold Fish of Gran Chimu)
View all from this seller>