Our Police. A History of the Providence Force from the First Watchman to the Latest Appointee, Illustrated with Portraits and Etchings 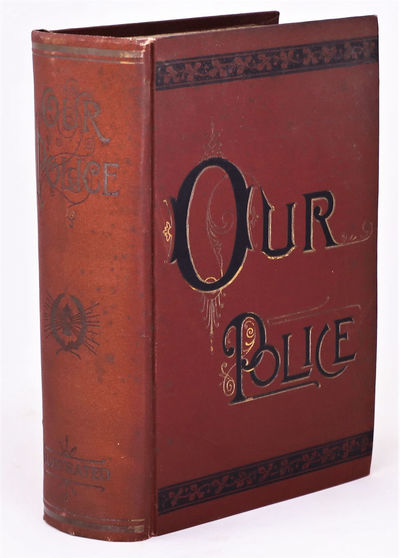 by Mann, Henry
Providence, Rhode Island, 1889. First Edition. Hardcover. Very good. 519 pp + extensive (ca. 100 pp) local advertising section. Original maroon cloth decorated in black and gilt. Mild rubbing to extremities; near fine. Although the history of policing in Providence dates back to 1651, when the city's first town sergeant was appointed, a true municipal police department was not established until 1864. Like many similar books published in the 1880s (during which handsome volumes with the main title "Our Police" were published in Cincinnati, Baltimore, New York, and Pittsburgh), this work is highly laudatory, beginning with the assertion that the police have made Providence "one of the safest and most orderly" cities in the world and "taught the class who make a living by crime to dread and avoid Rhode Island." But in addition to tales of criminals (both cunning and bumbling), heroic constables, and the triumph of the social order, the book does provide a valuable overview of the gradual professionalization of policing over time, as the problems (e.g., drinking on the job, lack of vigilance, inability to deal with riots, insufficient personnel to meet the needs of a growing population) were addressed and clear duties and expectations codified. (Inventory #: 21121)
$250.00 add to cart or Buy Direct from Walkabout Books
Share this item

The Philosophy of Health; or Health without Medicine: A Treatise on the Laws of the Human System

Boston : William D. Ticknor & Company , 1848
(click for more details about The Philosophy of Health; or Health without Medicine: A Treatise on the Laws of the Human System)

Chicago : Press of H. G. Adair , 1915
(click for more details about Report of the City Council Committee on Crime of the City of Chicago)
View all from this seller>