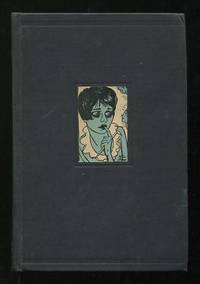 by Shaw, Charles G.
New York: Henry Holt and Company. Good. 1928. First Edition. Hardcover. (paper label on front cover; no dust jacket) [VG in external appearance, with some dust-soiling to the top edge and bumping to the upper corners; the front hinge is cracked, however (not separated), and there is an array of small white paper bits adhered to the rear cover (likely remnants from the long-vanished dust jacket having been stuck to the book at some point)]. (caricature sketches) A collection of brief personality snapshots of 24 celebrities -- pretty much a Who's Who of literary and theatrical figures of the day -- each accompanied by a full-page caricature drawing by Peter Arno. It's not really accurate to call these pieces "profiles," as we think of them today, but they are both amusing and insightful nonetheless; essentially, each one is just a rundown of observations about its subject, quotes from them, character traits or tics, etc. (Examples, from the piece on Anita Loos: "She travels with seventeen pieces of luggage, the bulk of which consists of her husband's ginger ale and California massage mud." "She thinks sophistication without sweetness is the deadliest thing in the world." "She is constantly losing bits of her belongings.") Charles G. Shaw (1892-1974) (per Wikipedia) was "a significant figure in American abstract art, [who] enjoyed a varied career as a writer and illustrator, poet, modernist painter, and collector"; during the 1920s, before he turned his attention seriously to art, he had been a freelance writer for various trendy magazines. (Per an acknowledgement note, a number of these pieces had previously appeared in the pages of Vanity Fair, The Bookman, and The New Yorker.) There's probably no better way to illustrate the range of the crowd the author profiled (and probably ran with) than to simply list them: Clarence Darrow, Deems Taylor, Texas Guinan, Gene Tunney, H.L. Mencken, George Jean Nathan, Helen Wills, George Luks (who was among Shaw's art teachers), Ernest Boyd, Ralph Barton (who had illustrated Shaw's first book, "Heart in a Hurricane," published the year before), Lillian Gish, William Beebe, George Gershwin, F. Scott Fitzgerald, Anita Loos (whose caricature in miniature adorns the book's front cover), Hermann Oelrichs, Paul Manship, Herbert B. Swope, "Michael Strange," Sinclair Lewis, Robert W. Chanler, Adele Astaire, Cornelius Vanderbilt Jr., and Tex Rickard. . (Inventory #: 25765)
$350.00 add to cart Available from ReadInk
Share this item
ReadInk
Offered by