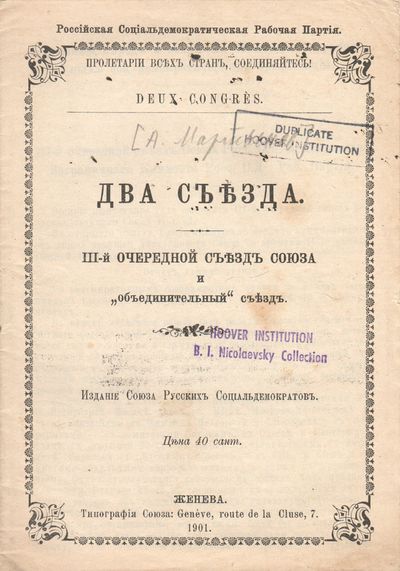 by [Martynov, Aleksandr]
Geneva: Izdanie "Soiuza Russkikh Sotsial'demokratov"; Mr. Rabkine, 1901. 12mo (15.5 × 11 cm). Original staple-stitched printed self-wrappers; 34 pp. Stamps of the Boris Nicolaevsky Collection (Hoover), with duplicate deaccession stamp. Light soil to wrappers; some pencil marks to margins, else very good. This pamphlet captures the complex politics within the Union of Russian Social Democrats Abroad, a joint Socialist organization founded by Russian political émigrés in Geneva in 1894. The organization was a precursor to the Russian Social Democratic Labor Party (RSDLP), the party of Lenin before its split into Mensheviks and Bolsheviks, with Lenin on the side of the Bolsheviks. The pamphlet reports on the organizing work done in Russian and abroad, the activities of the Bund, and includes an accounting table with precise financial information of the organization. Two splinter organizations "Iskra" (The Sparklet), which was founded by Lenin, and "Zaria" (The Dawn), are discussed in the pamphlet as anti-revolutionary and petit-bourgeoisie. The representatives of these organizations reportedly walked out of the meetings with shouts and whistling. Although the pamphlet is unaccredited, it seems to have been written by Aleksandr Martynov (1865-1935, born Piker, Saul Samoilovich). Martynov would later lead the Mensheviks in opposition to the Bolsheviks led by Lenin. (Inventory #: P6699)
$250.00 add to cart or Buy Direct from
Bernett Penka Rare Books
Share this item