The Patriarchal Institution, As Described by Members of its Own Family 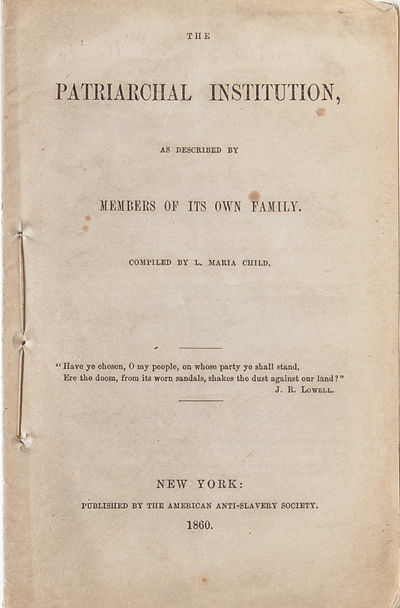 by Child, Lydia Maria
New York: American Anti-Slavery Society, 1860. First edition. Near Fine. Printed self-wrappers stitched at spine and measuring 4.5 x 7 inches. 55 pages, [1, blank]. Light foxing to the wrappers and a small chip to the lower rear wrap; in all an exceptionally nicely preserved copy of a scarce and important feminist tract. While OCLC reports numerous copies online or in microform, it reports only three physical copies at institutions (New York Historical Society, AAS, and the Huntington). It is the only first edition on the market. Reformer, novelist, and woman of letters Lydia Maria Child firmly believed that the national fates of women and enslaved people were tied. There could be no freedom for one group without liberating the other. She was the editor of Harriet Jacobs' 1861 Narrative, the founder of the New England Anti-Slavery Society, and a suffragist. The present work places responsibility for slavery onto the same patriarchal culture that binds privileged white women. Drawing together Southern arguments by slave holders and slavery proponents, Child then skillfully and logically rebuts them. In doing so, she proves the calm presence of mind possible in woman, exposes the inconsistency and cruelty of slavery, and provides readers with talking points of their own when confronted with similar racism. Purposefully or not, she became through works like these the founder of "one of the most influential branches of nineteenth century American feminism as a resistance movement committed to the idea that the key to social reform was the recognition and maintenance of human differences" (Pratt). Not in Krichmar. Feminist Companion 202. Near Fine. (Inventory #: 3513)
$1,500.00 add to cart or Buy Direct from
Whitmore Rare Books
Share this item