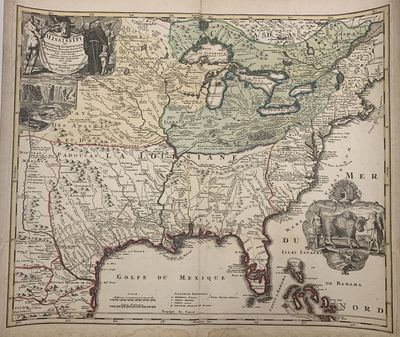 by HOMANN, Johann Baptist
Nuremburg: Homann, Johann Baptist, 1720. unbound. Map. Engraving with original hand coloring. Image measures 19 1/8" x 22.5". Stains on lower margin and scuffs in the Gulf of Mexico, some toning. Fine antique map showing the course of the Mississippi river. It is dedicated to Father Hennepin who is shown in the title cartouche with allegorical figures depicting his exploration of the Great Lakes region and the New World. Although the Mississippi's true course is not yet known, the land West of the river is noted as French. The map is beautifully engraved, and includes hunting scenes, long horn buffalo, beavers and Niagara Falls. Indigenous names are noted and portage routes included. Explorer routes are shown and waterfalls are carefully denoted. Johann Baptist Homann (1664-1724) was a renowned German mapmaker of the late 17th and early 18th century, including being geographer to the Holy Roman Emperor. His business was carried on by the Homann Heirs, also prolific and popular mapmakers. (Inventory #: 296688)
$3,000.00 add to cart or Buy Direct from
Argosy Book Store
Share this item

American atlas of the wars of the French Revolution and Napoleon

Philadelphia : McCarty & Davis
(click for more details about American atlas of the wars of the French Revolution and Napoleon)
View all from this seller>