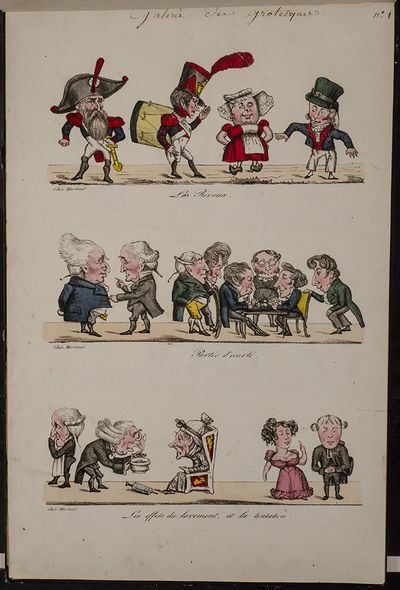 first edition
by GONDELIER; MARTINET, publisher
Paris: Martinet, 1821. Galerie des Grotesques [GONDELIER, Jean-Baptiste]. [Galerie des Grotesques]. [Paris]: [Chez] Martinet, [1821]. Oblong folio (16 x 10 1/2 inches; 406 x 267 mm.). Seven leaves, titled and numbered in manuscript, each with three hand colored etched plates making a total of twenty-one images. Contemporary quarter green calf over floral patterned black boards. The plates - each one lettered and numbered in manuscript "Galerie des Grotesques" No. 1. Les Rivaux; Partie d'écarté; Les effets du lavement, et la tentation (The Rivals; Discarded party; The effects of enema, and temptation) No. 2. Le maitre de danse, et le Coëffeur; Les joeurs de tonneau; Le remède inévitable (The dance master, and the hairdresser; The barrel joists; The inevitable cure) No. 3. Le bon gout; Cérémonie nuptiale; Le Dentiste (The right taste; Bridal ceremony; The Dentist) No. 4. Les conscrits; La sauteuse; Le bon ménage (The Conscripts; The jumpers; The good housekeeping) No. 5. Lecture des Tourneaux; Le cocher di Fiacre en dèfaut; Le Charlatan (Reading the turns; The coachman of Fiacre in defect; The Charlatan) No. 7. La Rosière; Le Pédicure; Les suites d'une Ribotte (La Rosière; The Pedicure; The aftermath of a Ribotte) No. 6. Partie d'Anes; Le Plaidoyer; Le Boston (Part of Anes; The Plea; Le Boston) Excessively Rare. OCLC locates just one suite (with only six plates) in libraries and institutions worldwide at Kunstbiblio Staatliche Museen Zu Berlin (Germany). GONDELIER, Jean-Baptiste (fl. 1821-1827). Gondelier was an engraver and a papermaker. As early as 1820, he was editor of a singer dedicated to Béranger, Le Constitution. He wanted to do city work but he also printed satirical prints, constituting the Gallery of the Grotesques. In 1826-1827 he collaborated in the writing of several plays performed at the Vaudeville theatre. Perhaps it was for this reason that he abandoned his lithograph patent and then applied for a letter printer's patent obtained in 1828. These 'Grotesque' caricatures appear to be based on the Woodward three-row strip genre typified by Grotesque Borders and Pigmy Revels, published by Ackermann and Fores, respectively, in 1799 and 1800. Fores continued to issue the Pigmy Revels strips in a folding panorama format, as well as in a spooled boxwood drum, well into the 1820s. "The relationship between Martinet-published works and Woodward's caricatures is commented on in an essay by Alberto Milano entitled "Change of Use, Change of Public, Change of Meaning: Printed Images Traveling Through Europe," appearing in a book edited by Evanghelia Stead, Reading Books and Prints as Cultural Objects (Cham, Switzerland: Palgrave MacMillan, 2018) at pp. 150-51. I am attaching scanned images of the relevant pages as Scans 1, 2, and 3.   As you will note, the author of the essay suggests that Martinet "transferred Woodward's caricatures in a series of larger prints entitled Les Passions," but I am skeptical. The only two examples of those prints I have found -- at the British Museum -- do not relate to any Woodward satire of which I am aware.  (For ease of reference, I am attaching the British Museum write-ups as BM-1 and BM-2.)" (William Gordon - author of the William A. Gordon Library of British Caricature). (Inventory #: 04822)
$14,500.00 add to cart or Buy Direct from
David Brass Rare Books
Share this item