Industrial Drawing; Comprising the Description and Uses of Drawing Instruments, the Construction of Plane Figures, the Projections and Sections of Geometrical Solids Architectural Elements, Mechanism, and Topographical Drawing; With Remarks of the Method of Teaching on the Subject 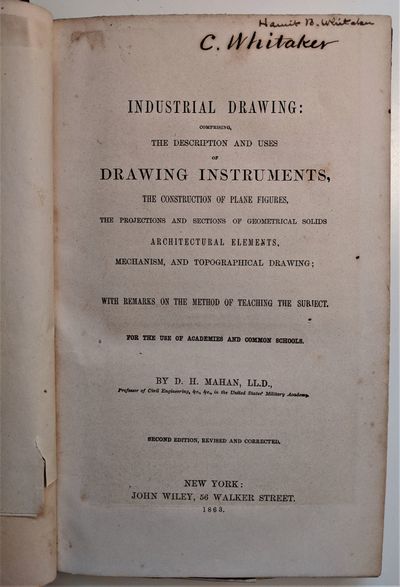 by Mahan, D. H.
New York: John Wiley, 1863. 8vo.  240 x 150 mm., [9 ½ x 6 inches].  xvi, 156, [1] pp.  Illustrated with 20 folding diagrams; tear to plate 6 without loss.  Bound in publisher's brown cloth, title gilt on spine; spine chipped and expertly repaired.  Ownership inscription of C. Whitaker, and  Harriet N. Whitaker on the title-page.  . Second edition, revised and corrected; published again at the height of the Civil War.  Includes instruction on method of drawing and its instruments, construction of arcs and circles, problems of rectilinear figures, construction of proportional lines and figures, projection, drawing machinery and topographical drawing.  Fully illustrated with diagrams to compliment the text. Dennis Hart Mahan was a graduate of West Point, who after graduating continued his education in Europe and upon his return became Professor of Civil and Military Engineering at the Academy.  In addition to this work on drawing, he was the author of six other text books, focusing on engineering, fortification, geometry, and mechanics.  They were published in South as well as the North and had influence on CSA engineers and tacticians as well as their counterparts in the Union cause.  His works were also translated in to German and used in Prussian military academies. Mahan was considered one of the most influential teachers and innovators of his time who had significant impact on the conduct of the War on both sides of the conflict.  After the War he was forced to resign from the Academy and committed suicide in 1871. Allibone, Critical Dictionary of English Literature and British and American Authors, ii, 1203.  Appleton's Encyclopedia of American Biography  IV, p, 176. (Inventory #: 580)
$200.00 add to cart Available from
De Simone Company
Share this item
De Simone Company, Booksellers
Offered by

Annual Report of the Superintendent of Common Schools of the State of New-York. Made to the Legislature . .

Albany : Printed by Croswell , 1839
(click for more details about Annual Report of the Superintendent of Common Schools of the State of New-York. Made to the Legislature . .)

The Deaf and Dumb: or, A Collection of Articles Relating to the Condition of Deaf Mutes; Their Education, and the Principal Asylums Devoted to Their Instruction

Published by D. K. Hitchcock 1836
(click for more details about The Deaf and Dumb: or, A Collection of Articles Relating to the Condition of Deaf Mutes; Their Education, and the Principal Asylums Devoted to Their Instruction)
View all from this seller>