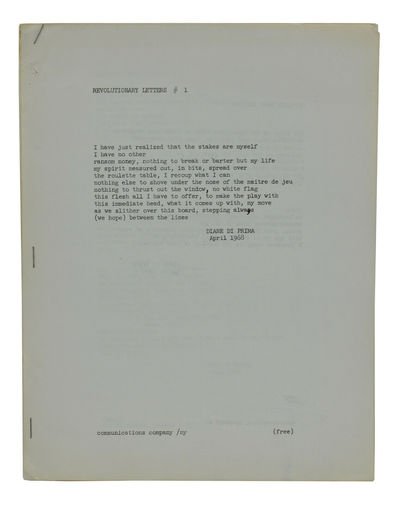 by Di Prima, Diane
New York: Communications Company, 1968. First Edition. Very Good. First edition. Published simultaneously by the Artists Workshop Press in Ann Arbor, with no known priority. 10pp including covers. Side-staples wrappers. Very Good. Tape ghost to rear cover, some light edge wear, thumbing and toning. Two holograph corrections to #1, and penned beneath letter #12: "A girl named Diane called one hour ago + asked Ben to return the call." As per Gary Lepper's A Bibliographical Introduction to Seventy-Five Modern American Authors, this is supposed to collect Letters #1-15. The present copy is lacking Letters 3-6, 14 and 15, though it is possible they were never bound in as there are no signs of them being extracted. A series of poems written with a blend of beat, utopian anarchism, ecological awareness, Zen and feminism. She would continue to expand on this project over her lifetime, with each subsequent edition containing more poems. (Inventory #: 140939943)
$750.00 add to cart Available from
Burnside Rare Books
Share this item
Burnside Rare Books
Offered by

The Desert of the Heart

Toronto : The Macmillan Company of Canada Limited , 1964
(click for more details about The Desert of the Heart)

Death of a Salesman

New York : The Viking Press , 1949
(click for more details about Death of a Salesman)
View all from this seller>