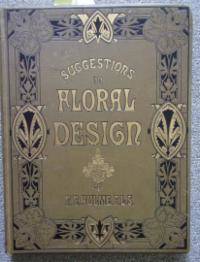 by HULME, F. Edward
HULME, F. Edward. SUGGESTIONS IN FLORAL DESIGN. London: Cassell Peter & Galpin, (1878-1879). Folio. Publisher's decorated cloth. 52 pages, 52 plates. First edition. [Holzenberg, For Art's Sake, 38]. Hulme's book, illustrating methods for turning designs in nature into ornamentation, was a cornerstone in the development of English Art Nouveau. His emphasis, as the title suggests, is on botanical form, particularly those of indigenous wild flowers, such as Hedge Cress, Corn Marigold, Meadow Saffron, etc. This was the only edition of the work--surprising given the importance of the work and the many editions of Hulme's other books. The handsome chromolithographic plates were exquisitely printed by Dupuy et fils, Paris. The influence of Hulme's teacher, Christopher Dresser, is apparent in many of Hulme's designs. According to Eric Holzenberg, For Art's Sake, The Aesthetic Movement in Print and Beyond, 1870-1890, this is "one of the most arresting, yet least well-known, color plate books of the Aesthetic era...the plates in his Suggestions are an entertaining riot of vivid purples, greens and yellow, often accented with gold." This work, when met with, is often falling to pieces and damaged through the Victorian use of gutta-percha as a binding medium, which then decays. With this copy, which is in excellent condition, the spine is neatly repaired, a few missing elements replaced with compatible cloth. The copy is free from foxing, which is unusual for this title. (Inventory #: 40581)
$1,250.00 add to cart Available from Bookpress
Share this item