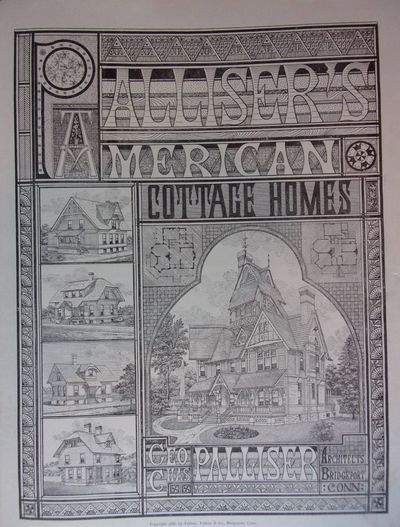 by PALLISER, PALLISER & CO
PALLISER, PALLISER & CO. PALLISER'S AMERICAN COTTAGE HOMES. Bridgeport, Connecticut: Palliser, 1878. Folio. Later quarter-blue pebbled cloth over black silk moire. (iii), (7) pages, plus 40 plates with text on verso of previous plate. First edition, thus. [Hitchcock, 907; Holzenberg, # 56]. An appealing and influential book, the designs range from simple and inexpensive to ambitious and pretentious. The American architectural firm of Palliser, Palliser & Company was founded in 1876. Like Shoppell's Co-Operative Building Plan Association, they specialized in the marketing of stock house plans. The plans reflect the full-fledged Americanized Queen Anne style of Norman Shaw. Palliser's first book plans, Model Homes for the People, was published in 1876, but it is the two volumes of cottages - Palliser's American Cottage Homes (1878) and Palliser's New Cottage Homes (1887) - that capture the inventiveness and vigor of the American Queen Anne style. The illustrated title-page of this book is an outstanding example of American Aesthetic book design. In addition to the house plans and views, there are seven pages which include specifications and contracts for builders and also building related advertisements in the back. Professionally rebound, else very good. (Inventory #: 40576)
$485.00 add to cart Available from Bookpress
Share this item