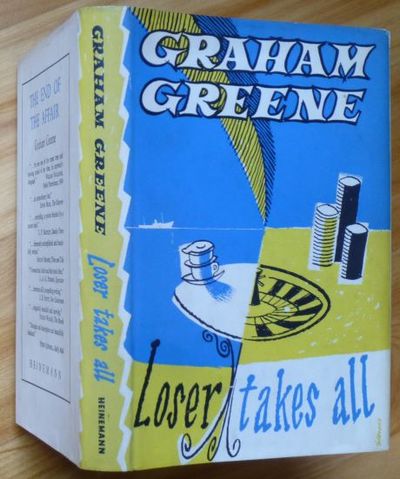 by Greene, Graham
1955. London: William Heinemann Ltd, (1955). Original dark blue cloth lettered in gilt, with dust jacket. First Edition of this novella about a man who devises a scheme to win big at Monte Carlo -- but his obsession causes him to lose his girl (whom he planned to marry there) in the process; with an acquaintance's help he gains the girl back, but only by losing all the money he had won -- hence "Loser Takes All." The following year appeared the British film with the same title (screenplay also by Greene) -- starring Glynis Johns, Rossano Brazzi, and Robert Morley. This is a very good copy (wear on some edges of the boards, minor fading, foxing on the top edge). The dust jacket is just about fine (a couple of short closed tears); because the jacket is in better condition than the volume, one may assume that it was "married" to this book. This is a presentation copy signed by Greene, with the inked title page inscription "For Clive | Graham Greene"; at a corner of the front paste-down is the penciled signature "Clive Hirschhorn | Johannesburg, March 1985". For over 30 years, the South African Clive Hirschhorn was a major London theatre and film critic for the Sunday Express; he also wrote biographies of Hollywood stars like Gene Kelly and of the Hollywood studios Warner Brothers, Universal, and Columbia. He was also a major collector of modern first editions (his collection, including 28 Graham Greene titles, sold at Bloomsbury in October 2012). Additionally, the front free endpaper bears the undated ink signature of Anthony Woodward, a professor of English at the University of Wiltwatersrand in Johannesburg (Hirschhorn's alma mater); among Woodward's writings is "Graham Greene: The War Against Boredom" (Cape Town 1971, Cassis B7112). Quite a nice circle of associations. (Inventory #: 14535)
$1,150.00 add to cart or Buy Direct from
Sumner & Stillman
Share this item