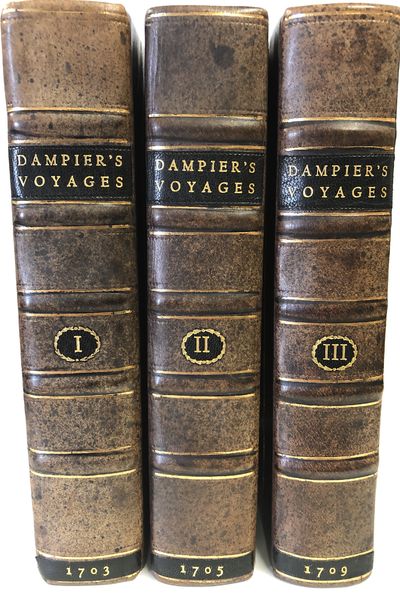 by Dampier, Captain William
London: James Knapton. Very Good with no dust jacket. Hardcover. Four volumes in three bound in modern 1/2 leather over marbled boards with five raised bands on spine with title, volume number and year stamped on black leather. Boards and binding in uniformly very good condition. New endpapers. Red speckled fore edge and bottom edge. Top edges soiled. Paper is generally clean with a range of moderate toning near front and back of volumes to very clean interiors. Very little foxing. Trimming is a little uneven, but no text lost. Vol. 1 with three folding maps for a total of four maps (calls for four folding maps) , plus tables. Map of East Indies has five inch tear (taped) plus fore edge taped. Vol. 2 is complete with four folding maps. The fore edge of two maps slightly extends beyond book block. Volume 3 and 4 (bound together) are complete with 5 maps and 10 plates plus tables; volume 4 complete with 12 maps, one folding, plus five plates. See Hill Collection 417, 419, 420 and 421. Captain William Dampier was an English explorer and navigator becoming the first Englishman to explore parts of what is today Australia. He also was the first to apparently describe a kangaroo outside of Australian texts. Dampier is also credited as the first person to circumnavigate the world three times, which considering the times was indeed an accomplishment. His work on the natural history of Australia lends some to credit him as that country's first natural historian. Dampier's voyages were sandwiched between those of Walter Raleigh and James Cook. The report from his first expedition (which explored the Atlantic Coast of North America entering the Pacific via Cape Horn and sailing up the Americas on the Pacific side) was published in 1697 as a huge commercial success and led to his commission to explore New Holland, or Australia on his second expedition. The third circumnavigation also plied Pacific waters before heading west across the Pacific. Overshadowing much of the natural history work he accomplished was Dampier's pillaging of treasure from other ships on the high seas effectively raising money for the crown. In all, these four volumes (in three) are in very nice condition and would be a worthy addition to any exploration library. ; Maps, plates, tables; 8vo 8" - 9" tall; 550, 184, 132, 112, 162, 198 pp . (Inventory #: 021412)
$4,500.00 add to cart Available from
Back of Beyond Books
Share this item