CALL TO GERMAN CITIZENS OF NEW YORK CITY; to protest in Union Square against blue laws 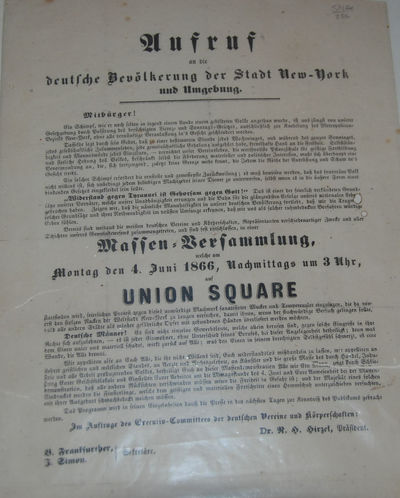 by [BROADSIDE - Beer Riot]
1866. 11-1/2 x 9 inches, written in German, couple of small holes, and closed tears, but very good. Blue laws which closed the bars on Sunday and costly liquor licenses led to riots in NY and other cities. Here is a translation: Call to Action Addressed to the German population of New York City and surrounding areas. Never before has a law been introduced as insulting as the one issued for the district of New York without any reasonable cause. This law undermines our social life and recreation during certain hours of the day and on Sundays. It restricts the freedom of the individual and is a blow to the honor of men. This law also limits the freedom and development of the individual as well as economic and social development. Life in our clubs and organizations will be seriously impacted. We should feel embarrassed and ashamed. Resistance against this tyranny means obeying the law of God. This is one of the principles of our forbearers who fought for freedom and independence and thus laid the foundation of our independence. Let's show the world that the same fighting spirit still exists in the German people and that we are worthy of our famous ancestors. Demonstrations will take place on Monday, June 4, 1866, at 3 PM Union Square We will show and testify that we are not bending to the forces and pressures which are trying to break the necks of the proud citizens of New York and beyond. German Men! We are the entrepreneurs who are called to revolt against such egregious actions. This call goes out to each of you, regardless of your occupation. What hurts one of us affects all of us. Therefore, we appeal to all of you who are not willing to be mistreated. We appeal to teachers, doctors, lawyers, artists, and the masses of the working class. Show solidarity by closing down your business by noon on June 4 and join us. Our freedom is at risk - all other considerations are secondary. We will shame those dark spirits which are trying to stop our progress. Issued by the Executive Committee of the German Associations and Corporations. (Inventory #: 59488)
$165.00 add to cart or Buy Direct from
Second Life Books
Share this item

THE UNVANQUISHED,; drawings by Edward Shenton

[Pittsburgh, PA] 1877
(click for more details about BLAIRSVILLE JUNCTION, PENNSYLVANIA)
View all from this seller>