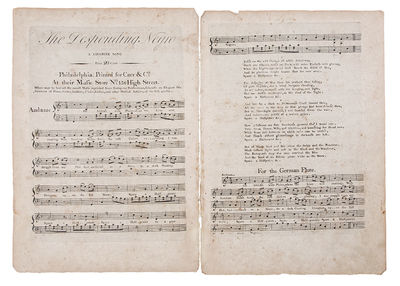 by [COLLINS, John; and William REEVE]
Philadelphia: Carr & Co, 1793. Quarto. Engraved sheet music, on two sheets. Very rare early American anti-slavery sheet music. Carr advertised the sale of this work in both Dunlap's American Daily Advertiser and Brown's Federal Gazette as early as August 1793. The poem by John Collins was first set to music by William Reeve the year prior in London, making this printing the likely first American issue. Given the large abolitionist Quaker population, this early American sheet music takes on added significance. Although not noted as an abolitionist, the Birmingham poet Collins wrote this poem in the wake of the debate over William Wilberforce's motion in Parliament to abolish slavery. In the poem, written in the first person from the perspective of the oppressed, the story is told of being kidnapped from Africa onto a slave ship, but during the crossing breaks his chains and runs on deck only to be struck by lightening, upon which due to the loss of his eyesight (and therefore perceived to have no value by the slavers) he is thrown overboard; although rescued, he laments the loss of his "watery grave" and his plight of wandering Britain free but penniless. See Haslinger regarding the use of death as a theme in 18th century antislavery verse (i.e. thereby equating slavery with death, or in this case a fate worse than death), in which she refers to the present poem: "Antislavery verse also uses meter to present enforced survival as a form of unfreedom that etiolates life; here, being fated to live is more unlucky than being fated to die. The emphatic verse of The Desponding Negro communicates the physical and psychological urgency of thespeakers desire to escape captivity (associated not only with enslavement but also with free existence in Britain), while also giving form to economic determinants of the speakers survival." As in all 18th century American sheet music, the present edition is very rare. OCLC records examples at Yale and Brigham Young; an additional example is located in the Library of Congress. Andrea Haslinger, "The Speaking and the Dead: Antislavery Poetry's Fictions of the Person" in The Eighteenth Century (Vol. 60, No. 4) Winter 2019. (Inventory #: 38996)
$5,250.00 add to cart or Buy Direct from
Donald A. Heald Rare Books
Share this item
Donald A. Heald Rare Books
Offered by