Mardi: and a Voyage Thither 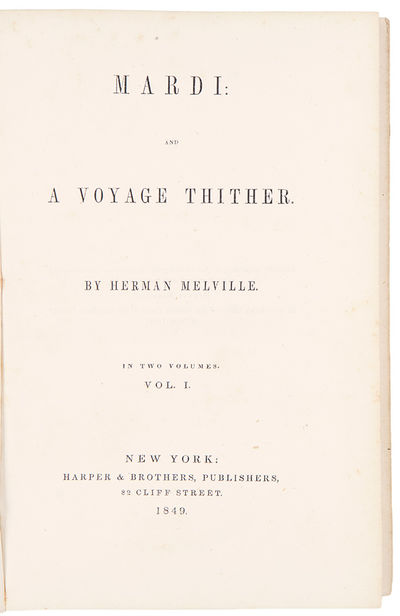 by MELVILLE, Herman (1819-1891)
New York: Harper & Brothers, 1849. 2 volumes, 8vo. 8-page publisher's advertisement at end of vol. 2. Publisher's brown cloth, covers blocked in blind, spines lettered in gilt, yellow endpapers. Housed in a brown cloth box. First American edition of Melville's third novel. Unlike his first two novels, here Melville's sea-going narrative adopts metaphorical allegories and parallel commentary, themes he would explore further in Moby Dick published two years later. In a letter to the English publisher John Murray dated 25 March 1848, Melville described Mardi: "The work I shall next publish will in downright earnest [be] a 'Romance of Polynesian Adventure'-...the reiterated imputation of being a romance in disguise has at last pricked me into a resolution to show those who may take any interest in the matter, that a real romance of mine is no Typee or Omoo, & is made of different stuff altogether. [It] is no dish water nor its model borrowed from the Circulating Library" (quoted by Davis & Gilman). BAL 13658; Davis & Gilman 70; Sadleir, Excursions 225. (Inventory #: 38987)
$2,400.00 add to cart or Buy Direct from
Donald A. Heald Rare Books
Share this item
Donald A. Heald Rare Books
Offered by