Four ships logs relating to his service aboard British battleships and cruisers between the wars, including time along the coasts of India and China 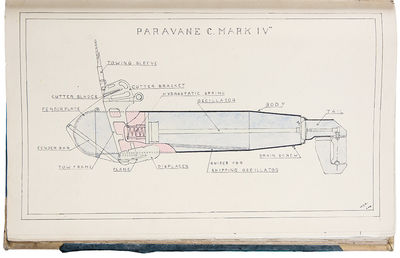 by KETTLE, L. H.
At sea, 1933. 4 volumes, folio. Over 700 manuscript pages, with approx. 90 manuscript maps and drawings of ships and ship-related schematics. Contemporary half cream and blue cloth, paper cover labels Well written and illustrated ships logs of a midshipman, including time on the China Station during the Second Sino-Japanese War. The logs begin on May 12, 1924, with midshipman Kettle reporting aboard the H.M.S. Resolution in Scotland. He spends the next year in various training drills, mostly at Invergordon or Rosyth, which he describes in great detail, and includes 22 inserted manuscript drawings of various parts of the ship, as well as several manuscript maps. On July 14, 1925 he transfers to the H.M.S. Effinghausen, then at Portsmouth. On August 25, after a month of drilling and repairs (and with several more sketches of the ship inserted), the cruiser departs Portsmouth toward Gibralter, Malta and the Suez Canal. Passing through Port Said on September 7 and the canal on the following day, the ship reaches Aden harbour on September 13 and Colombo ten days later and Trincomalee soon thereafter. Kettle's entries describe the scenery viewed, ships encountered, issues with the ship, weather, etc. He recounts in great detail lectures on the history of colonialism in the region given by the Commander-in-Chief. Additional sketches, schematic diagrams and graphs are inserted, relating to the ship. The voyage continues through the first half of 1926, with stops in Calcutta, Rangoon, Madras, Bombay, and Mauritius, before crossing to Africa, stopping at Mombasa and Zanzibar. Crossing back towards India, the ship spends the summer and autumn of 1926 along the western shore, continuing military drills, and participating in yacht races, field hockey, cricket matches, etc. Early in 1927, the ship crosses the sea to Rangoon but returns to Trincomali by March, where Kettle, along with the other midshipman are given new assignments and passage home. The third log begins in January 1931, with Kettle receiving an appointment to the H.M.S. Sussex, which he joins at Malta in February for an 8-month cruise in the Meditteranean, stationed mostly at or in the vicinity of Malta, before returning to Great Britain. In his usual style, Kettle describes war-like exercises in great detail, and gives lots of information on ships encountered, and the day-to-day maintenance of the ship. After a few weeks' leave, Kettle sets sail aboard the P&O Mail ship Corfu on a voyage to his new commission, the HMS Cumberland at Shanghai, which he reaches in November. In a December entry, Kettle details the history behind the "confused melee in Manchuria" recounting the events between Japan and China and the Mukden incident. Crossing to Hong Kong, in December Kittle writes further about the political unrest in China: "In China the student problem has become acute especially in Peking where the foreign office was burnt down. General Chang Kai Shek ... has resigned and the Canton leaders have been asked to unite both sections into one united republic." By the end of January and continuing through March, Kettle's lengthy entries are filled with news of the conflict in China. Although mostly stationed at Hong Kong, in May 1932, the HMS Cumberland departs for Woosung, and Kittle details the destruction: "what a scene of desolation and destruction the place presents" before continuing to Shanghai, ChinKiang, Nanking, Hankow, Kiukiang, Wei Hai Wei. Kettle give lengthy descriptions of the landscape, people and ships encountered, and exercises, including various competitions among British ships. Included in this section of the log are several manuscript maps by Kettle of the various Chinese regions visited. In September, the ship sails for Dalien (Dairen) and Port Arthur, before continuing to Chefoo: "Instead of improving ... the situation at Chefoo has again become worse. General Ham had surrounded the town of Laiyang and Laichow, and offering tribes of ten to fifty dollars has won over a great many troops to his side ... The conditions inland are very bad for some 8000 soldiers of both sides are roaming the countryside in bands of about two hundred. In mid-October, the ship reaches Nagasaki for a brief visit, before sailing on for Keelung, en route back to Hong Kong. By November, the H.M.S. Cumberland begins its journey home, via Singapore, Colombo and through the Suez, reaching Great Britain the week before Christmas. The final section of the log comprises Kettle's service aboard the H.M.S. Westminster and H.M.S. Hood in British waters between January - November 1933. (Inventory #: 38959)
$3,500.00 add to cart or Buy Direct from
Donald A. Heald Rare Books
Share this item
Donald A. Heald Rare Books
Offered by