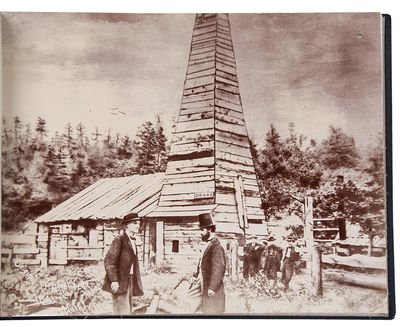 by MATHER, John A.
Titusville, Pennsylvania: John. A. Mather, 1895. Oblong small folio. (10 x 13 1/4 inches). Letterpress title, 2 preliminary leaves of text. 12 photographs, printing-out paper prints, each linen backed as issued, with Mather's caption in the negative. Publisher's dark blue cloth, covers bordered in blind, upper covers lettered in gilt. Important photographic record of the early days of the U.S. Petroleum Industry. The work was made and published by the pioneer photographer of the Pennsylvania oil fields, John A. Mather. The first oil well in the United States was drilled by E. L. Drake in Oil Creek, Pennsylvania, near Titusville, in 1859. On the 29th of August oil was struck. John A. Mather, a recent English immigrant and aspiring photographer, heard of Drake's discovery and the ensuing oil rush, and moved to Titusville in October 1860. He set up a gallery, built a floating photo studio and over the next forty years compiled an exhaustive photographic record of the growth of the oil industry. Mather's photographs rarely turn up in the marketplace. The photographs in the present work were printed in 1895 from earlier negatives. Most photographs are identified and dated in the negative. Mather's photographs serve up a visual narrative of this transitional period, documenting the rapid growth of the region from 1864-1880s, when it emerged as the first site of substantial oil wealth in the United States. Mr. Drake is shown along with his first oil well. Mather also depicts the early days of Titusville. The Oil Exchange Hotel is set amidst rolling hills marked with numerous erector-set-like vertical structures. Laborers of all ages, including child "oil dippers," are chronicled along with the burly men who drilled and operated the giant rigs. Two additional parts were subsequently published, though are rarely encountered; all parts are scarce. Giddens, Paul H., Early Days of Oil: A Pictorial History of the Beginnings of the Industry in Pennsylvania (Princeton: 1948). (Inventory #: 38947)
$4,250.00 add to cart or Buy Direct from
Donald A. Heald Rare Books
Share this item
Donald A. Heald Rare Books
Offered by