Mineral Wealth, Climate and Rain-Fall, and Nature Resources of the Black Hills of Dakota 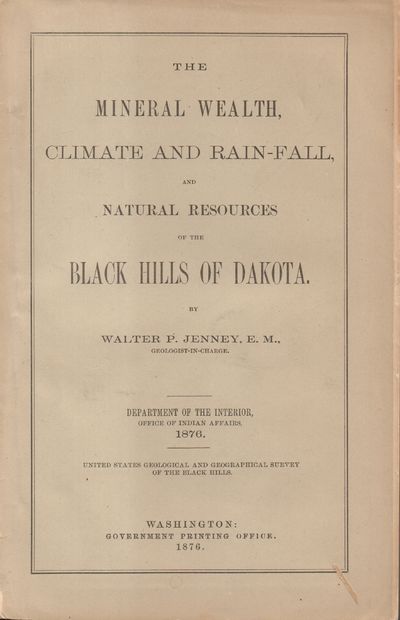 by Jenney, Walter P.
Washington: Government Printing Office. Good. 1876. Pamphlet. Tan wraps with black lettering; includes folding map "Preliminary Map, 1875", depicting the geology of the Black Hills. 4th Congress, 1st Session, Senate, Ex. Doc. No. 51. Rear wrap has been affixed with archival tape, and wraps have light toning; map has a 2" tear that has been fixed with archival tape. This document contains Chapters V, VI, and VII of the final report titled "Report on the Geology and Resources of the Black Hills of Dakota" by Henry Newton and Walter Jenney which was published in 1880. Jenney's contributions to the report - climate, mineral wealth, and map - were called for in advance by the U. S. Senate and were published in 1876. ; 8vo 8" - 9" tall; 71 pp . (Inventory #: 021435)
$425.00 add to cart Available from
Back of Beyond Books
Share this item