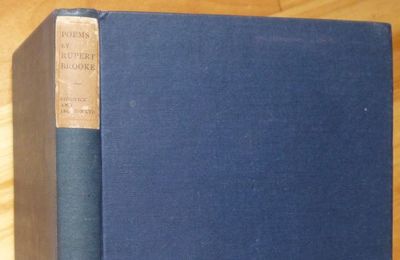 by Brooke, Rupert
1911. London: Sidgwick & Jackson, 1911. Original very dark blue cloth with paper spine label. First Edition of Rupert Brooke's first book, which consisted of only 500 copies; Frank Sidgwick, a fellow Rugby graduate, had agreed to publish it but only at Brooke's financial risk. POEMS was preceded only by several (now quite rare) prize poem pamphlets from Brooke's years at Rugby School, 1904-1905. Brooke's next (and last) volume of verse would be 1914 AND OTHER POEMS, published posthumously in 1915, after his death that year by blood poisoning in the Aegean Sea, while awaiting action in the Gallipoli campaign. A remarkably beautiful young man, Brooke was cast as the young hero of war by an admiring public before the war became too awful. He was overpraised for a time; then he was devalued in the years of disillusion. His real stature began to emerge after World War II, when he was recognized as a young poet of real quality who did not live to fulfill his great promise. [CGEL] This is a near-fine copy (spine label slightly darkened and rubbed at its edges). Keynes 5 ("The first twelve impressions [into 1916] were not provided with a dust-jacket"). Bookplate (signed design by James Thorpe) of the noted American collector Edith Barbara Tranter (1884-1951), whose library was sold at Parke-Bernet in 1952. Housed in a felt-lined morocco-backed clamshell case by Asprey. (Inventory #: 14537)
$650.00 add to cart or Buy Direct from
Sumner & Stillman
Share this item