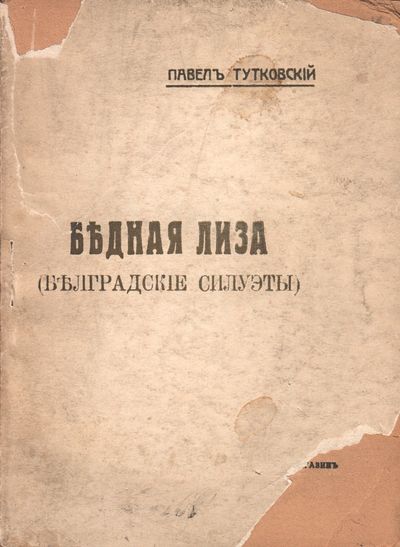 by Tutkovskii, Pavel
Belgrade: Sklad izdaniia Vseslavianskii knizhnyi magazin, 1925. 12mo (15 × 11.5 cm). Original printed side-stapled wrappers; 47, [1] pp. Text toned and brittle; first few pages and front wrapper chipped. A libretto for a comedic operetta about the life and sorrows of the Russian White émigré community in Belgrade. The central character, Liza, who seeks to be reunited with her husband in emigration, is a reference to the character in the eponymous eighteenth-century sentimental novel by Nikolai Karamzin. The operetta was written by a White émigré, the writer and musician Pavel Tutkovskii (1889-1959). Tutkovskii evacuated from the Crimea with the army of General Wrangel in 1920, and lived in Belgrade until his re-settlement in Paris in 1928, later moving to the United States. In Belgrade Tutkohevskii wrote for émigré publications such as Novoe vremia and was a founding member of the Union of the Russian Writers and Journalists in Yugoslavia. Rare. As of June 2020 KVK and OCLC show copies at Amherst, Berkley, Harvard, Ohio and Stanford. (Inventory #: P002782)
$150.00 add to cart or Buy Direct from
Bernett Penka Rare Books
Share this item