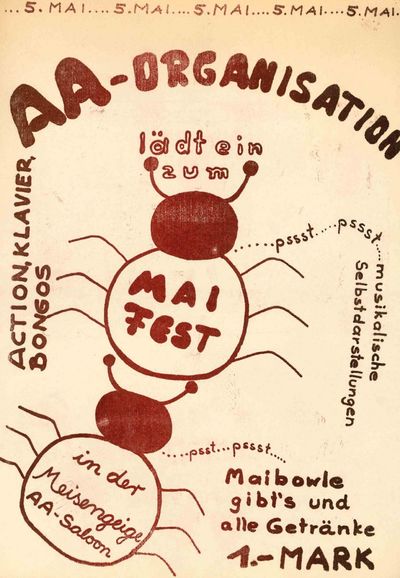 "The World's Most Famous Sex Commune"

Various formats, most A4. Very good. Group of scarce ephemera documenting the activities of the AA-Commune in Berlin, a utopian commune founded by Otto Muehl (1925-2013), the Austrian artist known for his participation in Viennese Actionism. The original commune was founded in 1972 in Friedrichshof, near Vienna, and became an international movement known as the Aktionsanalytische Organization (AAO). "The Friedrichshof 'family' had 600 members at its height, and saw itself as building on millenarian experiments like Oneida, but exchanging their theology for a heady mix of Marxism, anarchism and Reichian psychoanalysis. The Friedrichshof communards pooled their resources and established a kind of anti-society based on the abolition of money, property, careers, romantic love, and the nuclear family. Muehl proclaimed 'group marriage' in 1973, couple relationships were dissolved, and private space and intimacy were abolished, with a view to producing a completely communal or collective sexuality" (David Bennett, "Sexual revolutions: Towards a brief history," p. 46). Affiliated communes sprung up in Berlin, Frankfurt, Geneva, Krefeld and elsewhere. The Guardian later dubbed the original Friedrichshof commune the "world's most famous sex commune" during the 1970s. More importantly, it has also been described as a coercive cult focused on the persona of Muehl, who was later sentenced to a prison term for abusing minors living in the commune.

4. Broadside announcing the May Celebration of the AAO. With advertisements for the commune-afiliated bar "Meisengeige" in Goebenstr. Single sheet, A4.

5. Four-page pamphlet introducing the aims of the AAO, with basic statements and various introductory events for interested parties.

7. Broadside announcing an intensive course organized by the AAO, to be held in Kreuzberg. Single sheet, A4.

Rare; as of July 2020, none of these ephemeral documents are recorded via KVK or OCLC. (Inventory #: 50796)
$950.00 add to cart or Buy Direct from
Bernett Penka Rare Books
Share this item