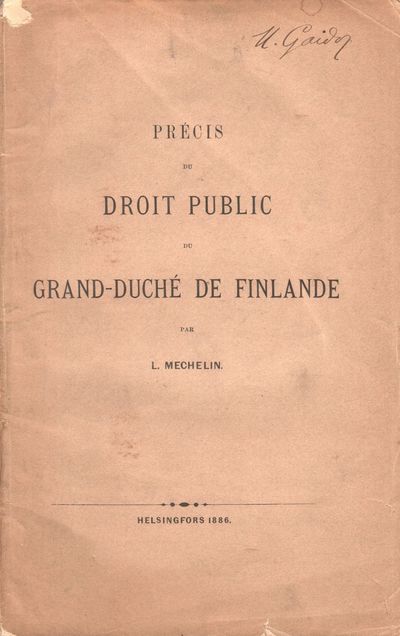 by Mechelin, L[eonard]
Helsinki: J.C. Frenckell, 1886. Octavo (22 × 14 cm). Original printed wrappers; 127 pp. Wrappers lighly toned due to stock; small chips along wrapper edges. Internally very good. Second edition. An important work on Constitutional law of Finland, commenting specifically on Russo-Finish political relations, written by the law professor and statesman, Leonard Mechelin (1839-1914). Published in French for political reasons, the text was soon translated into Russian and English, initiating a prolonged battle with the Russian nationalist press and government. According to the scholar Leonard Lundin, in this work Mechelin "developed the thesis that was thenceforth to underlie all his polemical writings and activities: that the union of Russia and Finland did not result in a fusion into one state, but that the two states retained their separate identities and forms of government" (See, Russification in the Baltic Provinces and Finland, 1855-1914, pp. 394-395). In opposition to the Russian Czar, in 1905-1908 Mechelin would go on to form a government, transforming Finland into world's fist liberal democracy. Scarce in the trade. (Inventory #: 50868)
$75.00 add to cart or Buy Direct from
Bernett Penka Rare Books
Share this item