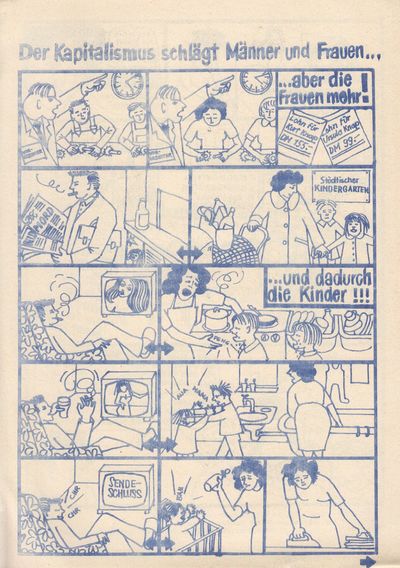 West Berlin: self-published, 1968-1982. Mostly single leaves of A4, offset-printed or mimeographed to rectos and versos; a few folded leaves; a few on colored stock. Mostly very good; occasional small nicks to margins. A group of twenty-seven broadsides and flyers documenting the Women's Movement in West Berlin (Neue Deutsche Frauenbewegung), from 1968 through 1982, through its diverse concerns and projects. The flyers contains calls for protests for abortion rights, emancipation in the labor market, world peace, cooperative daycare, self-help groups, and others. Of particular interest is a group of documents by the Aktionsrat zur Befreiung der Frauen (Action Committee for the Liberation of Women), an early initiative founded in January 1968, which pioneered the concept of the "Kinderladen," cooperative childcare centers, to provide mothers with an alternate model for child-rearing. They would go on to develop a campaign to implement wages for housework. It contains early statements by the group, questionnaires for women, and a list of the earliest Kinderläden in Berlin. Another group concerns protests against paragraph 218, which made abortions punishable by prison terms. Two flyers were published by the first women's center in West Berlin, Frauenzentrum Westberlin, then located at Hornstr. 2. A scarce group of documents. (Inventory #: P003925)
$750.00 add to cart or Buy Direct from
Bernett Penka Rare Books
Share this item