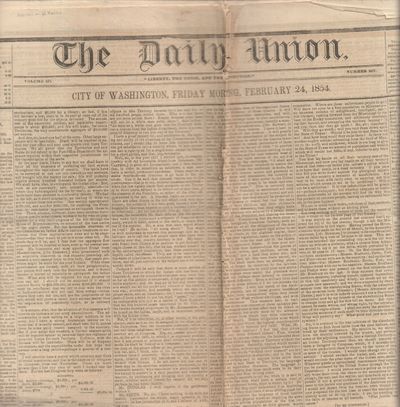 by Armstrong, Robert--Publisher
Washington, D. C: Robert Armstrong. Good. 1854. Newspaper. Large format newspaper 24 x 19 inches with typical splits at folds but holding well. Edge wear and toning. The Daily Union specialized on reporting the affairs of Congress. This issue contains much on Kansas and Nebraska, a long speach by Truman Smith of Connecticut on the establishment of new territories, a debate on the Homestead Act and the presentation of credentials of Stephen A Douglas, recently elected Senator from Illinois. The paper is bordered in black mourning the death of General Robert Armstrong (War of 1812) , the proprietor of the Daily Union paper. ; 4 pp . (Inventory #: 021458)
$40.00 add to cart Available from
Back of Beyond Books
Share this item