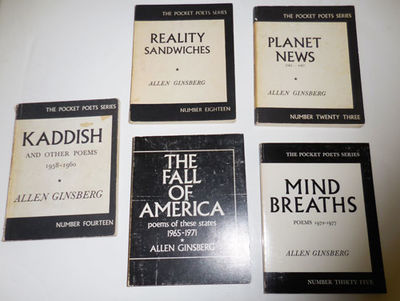 by Beats - Ginsberg, Allen
San Francisco: City Lights, Various. First edition. Paperback. Very Good. Sold Here together are five City Lights Pocket Poet Series paperbound volumes by Allen Ginsberg. All our first paperbound trade printings (some are second issue) and all hail from the library of poet Kenneth Irby who has signed all five copies and indicated where and when he purchased them. They include: (1) Kaddish and Other Poems 1958 - 1960. Pocket Poets Fourteen. Second issue with 7 lines of text on the rear cover. From 1961., (2) Reality Sandwiches. Pocket Poets Eighteen. First printing from 1963. (3) Planet News 1961 - 1967. Pocket Poets Twenty Three. First American printing from 1968., (4) The Fall of America Poems of these States 1965 - 1971. Pocket Poets Thirty. Second issue with black covers printed in white. First printing from 1972., and (5) Mind Breaths Poems 1972 - 1977. Pocket Poets Thirt Five. First printing from 1977. All books in good to very good condition. Clearly well-thumbed and well-loved by Irby. (Inventory #: 29730)
$250.00 add to cart or Buy Direct from Derringer Books
Share this item
Derringer Books
Offered by

Allen Ruppersberg One of Many - Origins and Variants

Dusseldorf : Kunsthalle Dusseldorf , 2006
(click for more details about Allen Ruppersberg One of Many - Origins and Variants)
View all from this seller>