Supplementary Memorandum by the Government of Palestine, Including Notes on Evidence Given to the United Nations' Special Committee on Palestine up to the 12th July, 1947 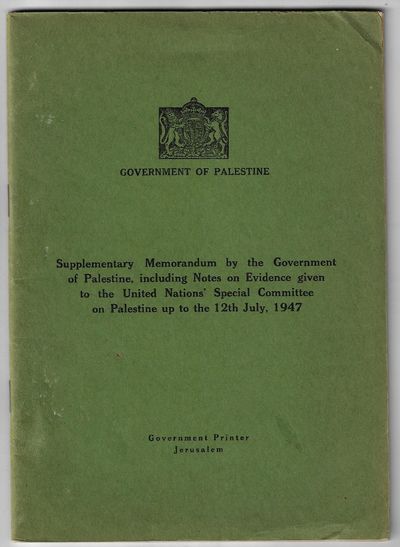 Jerusalem: Government Printer, 1947. First Edition. Softcover. Very good. 59 pp, stapled wrappers. Light abrasion to front cover, upper corner bumped, owner's initials in ink on title page, otherwise unmarked. Chapter I (the first 25 pages) offers "an historical summary of the principal political events in Palestine since 1st January, 1946." This is followed by "Notes on Statements by Jewish Witnesses," "a note on education," "a note on the cost of lawlessness in Palestine," and "a brief note on the 'Political Survey 1946-47' presented by the Jewish Agency to the Committee." Underneath the table of contents is the explanation that "the purpose of the Notes in Chapters II and V is to correct some of the mis-statements made by the Committee. Since no Arab evidence has been offered, they necessarily deal only with the Jewish evidence. They omit any comment on the calumnies which some of this evidence contains. The facts may be allowed to speak for themselves. (Inventory #: 21178)
$100.00 add to cart or Buy Direct from Walkabout Books
Share this item

[Prospectus for] Life and Achievements of Admiral Dewey, Faithful Portrayal by Pen and Picture of a Grand and Heroic Career by Murat Halstead

Chicago : North American Publishing Company , 1899
(click for more details about [Prospectus for] Life and Achievements of Admiral Dewey, Faithful Portrayal by Pen and Picture of a Grand and Heroic Career by Murat Halstead)

Los Angeles : Crest of Hollywood , 1954
(click for more details about Prints by California Artists)
View all from this seller>