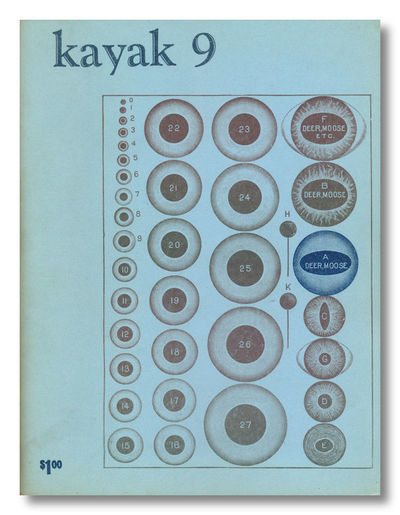 by Kayak
San Francisco: Kayak Books, 1966. Whole number nine (of 64 numbers published through May 1984). Small quarto. Pictorial wrapper. Heavily illustrated. Fine. Edited by George Hitchcock. A distinguished periodical published in tandem with the book imprint, intended as a biannual, later an irregular quarterly, vowing from the start to "print what its editor considers the best poets now working in the United States ... [being] particularly hospitable to surrealist, imagist and political poems ... [and] vehement or ribald articles on the subject of modern poetry." The illustrations follow in the same tradition, and the roster of authors is impressive, including here Margaret Atwood, Simpson, Sandy, Tate, Bly, Tagliabue, and many more. CLAY & PHILLIPS, p. 283. (Inventory #: WRCLIT83847)
$30.00 add to cart or Buy Direct from
William Reese Co. - Literature
Share this item

[Lot of Eighteen Catalogues of the Rowfant Club's Annual Auction]