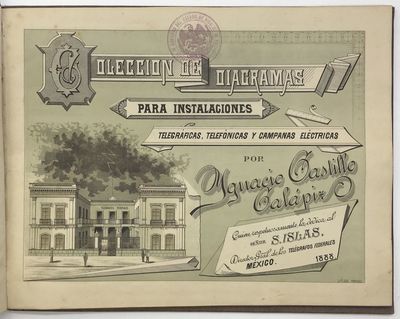 by [Mexico]. [Communications]
Mexico City, 1888. About very good.. [35] leaves of plates. Oblong small folio. Original embossed cloth boards. Light fading and minor patches of staining to boards; front hinge cracking. Slightly later gift inscription on front free endpaper; small, slightly later ink stamp on title page. Light tanning. A rare and fascinating Mexican lithograph book that shows thirty-three different plans for telephone, telegraph, and electric bell installations. The first telegraph line in the country was built between Mexico City and Puebla in 1855, and in 1885 lines were built parallel with railroad tracks, greatly expanding the service, which was centralized under the federal government. A subsidiary of Bell telephones, the Mexico Telephone Company, was established in Mexico City in the mid-1880s. The present manual offers schematic diagrams to assist in installation during a period of rapid growth and advancement of telecommunications systems. Little information is to be found regarding the author, nor does he seem to have composed additional works on this subject or any other; however, given the dedication on the color lithograph title page to the director of the federal telegraph bureau, it seems likely that he was an employee in their offices. The lithographs delineate communications from simple circuits to several quite complex systems (some incorporating Siemens, Edison, and Tillotson apparatus), and offers diagrams of several real-life examples, such as the system of the federal government office in San Luis Potosi and the setup at the head office for the Mexico City-Yucatan telegraph line. This copy bears an 1891 gift inscription from one Pedro Y. Prieta to a female colleague in the Hidalgo state telegraph office, as well as a contemporary Hidalgo state government ink stamp. A neat schematic depiction of communications technologies in Mexico at the dawn of the telephone era; we locate only one copy, at the Ibero-Amerikanisches Institut in Germany. (Inventory #: 1428)
$975.00 add to cart Available from
McBride Rare Books
Share this item