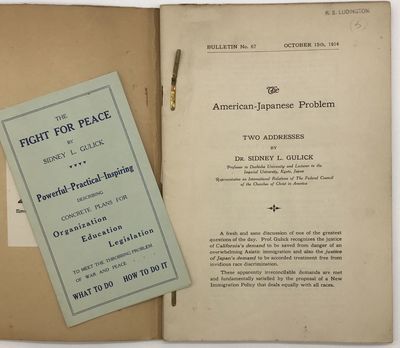 by Gulick, Sidney L.
[Various locations, 1915. About very good.. Four pamphlets and two promotional pieces, approximately [100]pp. total. Slightly later pain stiff wrappers, manuscript titles on sine and front wrap, riveted at gutter. Slightly later bookplate to inside front wrapper, small ink ownership stamps on title pages. Minor edge wear to a couple of leaves; light tanning. An assemblage of six works by pro-Japanese advocate Sidney L. Gulick, including four pamphlets and two promotionals. Gulick went to Dartmouth and was ordained at Union Theological Seminary during the 1880s, and was sent to Japan, where he served first as a missionary in Matsuyama and then became a professor of theology at the Imperial University of Kyoto. He returned to the United States just prior to World War I, and became a strong proponent for Japanese immigration and the rights of immigrants and Japanese-Americans. "The Federal Council of Churches in America (FCCA) offered him a position in 1914 as their expert on Japan. Gulick's long employment by the FCCA was as an advocate of a policy of understanding and reconciliation-work he considered an extension of his previous missionary career. He already loved the country and soon became such a sympathizer for its foreign policies that the Bureau of Investigation (predecessor to the Federal Bureau of Investigation) considered him a paid agent of the Japanese government and put him under surveillance (1921-1922).... His extensive writing took two themes: first, the history and culture of Japan itself, and second, Japanese in the United States. Gulick wrote his second book, The American Japanese Problem, in 1914, turning to the latter of these two interlinked concerns. He argued that Japanese were assimilable in American society and that agitation against them was based on fears of unlimited immigration swamping California" - ANB. The works collected here, dating to the period of publication of The American Japanese Problem and just after, are as follows: 1) The American-Japanese Problem: Two Addresses. [New York]. 1914. 43,[1]pp. 2) Asia's Appeal to America. [New York. 1915]. 18pp. 3) A Call for Comprehensive Immigration Legislation. New York. [1915]. [4]pp. 4) Hawaii's American Japanese Problem.... Honolulu: Star-Bulletin, [1915]. 44pp. Also present are a folded broadside manifesto and advertisement for the World Alliance of the Churches for the Promotion of International Friendship, for whom Gulick served as Field Secretary, and a folding promotional for his third book, The Fight for Peace. Overall, a nicely representative sample of Gulick's views and work from this prolific period of his career. (Inventory #: 1414)
$500.00 add to cart Available from
McBride Rare Books
Share this item