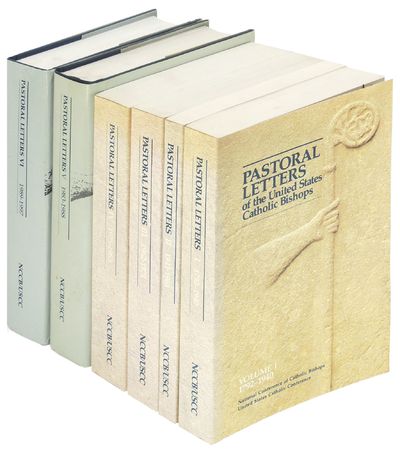 by Nolan, Hugh J. and Patrick W. Carey (editors)
National Conference of Catholic Bishops / United States Catholic Conference, 1998. Paperback and Hardback. Very Good. Paperback and Hardback. Six volumes. The first four are paperbacks and the last two are hardcovers with dust jackets. These volumes contain the full texts of pastoral letters and statements with appendices including important events within the Catholic Church in the U.S. Topics vary depending on the years they cover. Examples include many current events of the time: education, teaching, celebration of the sacraments with persons with disabilities, domestic violence, health care reform, HIV / AIDS crisis, moral education, political responsibility, genetic testing, welfare reform, Third World debt, Catholic-Jewish relations, US-Panama relations, handgun violence, hostages in Iran, race relations and poverty, farm labor, celibacy, peace and Vietnam, birth control, human rights, abortion, and much more. Minor sunning to spines of some volumes. Previous ownership markings in pen on front endpapers and/or title pages. Minor wear to edges of jackets (on two hardcover volumes). Volumes vary in pagination, but are around 400 - 500 pages each. This set may require an extra shipping fee. REL/070820. (Inventory #: 34173)
$125.00 add to cart or Buy Direct from
Kelmscott Bookshop
Share this item

A Lively Look at Papermaking

North Hills, PA : Bird & Bull Press , 1980
(click for more details about A Lively Look at Papermaking)
View all from this seller>