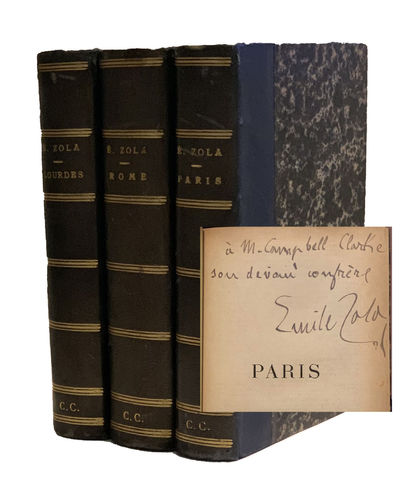 signed first edition Hardcover
by Zola, Émile
Paris: Bibliotheque-Charpentier, 1894, 1896, 1898 Three volumes. First editions. Presentation copies; all three volumes signed and inscribed by Zola on the half-titles to his friend, Campbell Clarke. All three volumes uniformly bound for Clarke in quarter green calf over marbled boards, original wrappers bound in, with his initials to the spines and bookplates to front pastedowns. Some light rubbing and minor wear to the extremities; internally, leaves a bit toned as usual, else bright and very clean. Les Trois Villes, or The Three Cities, follows Emile Zola's fictional protagonist, Abbe Pierre Froment, on his travels through Lourdes, Paris, and Rome. The trilogy demonstrates Zola's characteristic Naturalism style -- as a literary movement, Naturalism relied on empiricism and the scientific method, rejecting romanticism through its requirement that characters are subject to the force of their circumstances. As it does in this trilogy, Naturalism often manifests itself in the form of social commentary through fiction, in this case focused on the three cities for which each of the books are named. Emile Zola (1840-1902) was a French novelist, playwright, and journalist, noted for his contributions to the literary movement known as Naturalism, and made famous by his 1877 novel L'Assommoir, which lead to further success as a novelist. Aside from his literary contributions, Zola is perhaps best known for his involvement in the so-called Dreyfus Affair and his iconic "J'Accuse.!" headline in the Parisian daily newspaper "L'Aurore" in 1898, accusing the French President of anti-Semitism and wrongful conviction of an innocent man. Campbell Clarke (1845-1902) was a British author and journalist who served as librarian at the British Museum before his tenure as an international correspondent for the Daily Telegraph. Clarke was stationed in a number of countries, including Turkey, Greece, Germany, Italy, and France. Notably, when Zola visited London in 1893 to present his speech "Anonymity in the Press" to the Institute of Journalists, Clarke acted as a tour guide for Zola, and led him on a personal tour through the National Gallery of England.. Signed by Author. First Edition.. Hard Cover. Near Fine. (Inventory #: EZ002)
$5,000.00 add to cart or Buy Direct from
B & B Rare Books
Share this item

New York: The Viking Press , 1933
(click for more details about After Such Pleasures)
View all from this seller>