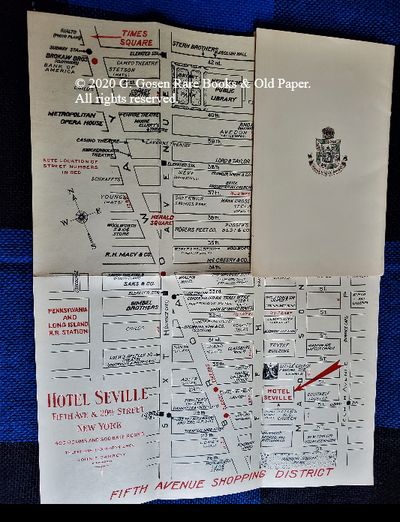 by [Ladies' Mile Map] Fifth Avenue Shopping District Map, circa 1920, Hotel Seville.
Fifth Avenue Shopping District Map, circa
1920. Hotel Seville. The Fine Art of Good Service. John F. Garrety, Manager. A promotional brochure (14 cm x 9 cm) illustrated in color, with a fold-out color map (27 cm x 20 cm) of the "Fifth Avenue Shopping District," from Twenty-Sixth Street up to Forty-Second Street. A northern extension of Manhattan's famous "Ladies' Mile" of the Gilded Age up Fifth Avenue, above Twenty-Third Street to Herald Square, this early twentieth century area was called the "Fifth Avenue Shopping District." With street numbers on Broadway and Fifth Avenue printed in red; and, subway stations, stores, churches, insurance companies, banks, as well as the original Metropolitan Opera House at Broadway and Thirty-Ninth Street, all labeled, this booklet is believed to be have been printed for the Hotel Seville about 1920. It is not later than 1924, when Saks & Company moved to Fifth Avenue and Forty-Ninth Street and became Saks Fifth Avenue. On the recto of the street map is a floor plan of the hotel with prices, showing the footprint of each room. The back cover has a coat of arms with the motto: Virtus Laudem Imperat. Paper covers, 12 pages. Fine, almost as new. (Inventory #: 390)
$450.00 add to cart Available from
Gosen Rare Books
Share this item

New York : Metropolitan Job Print, 38 and 40 Vesey Street, , 1890
(click for more details about A System of Rapid Transit for the City of New York. Proposed by E. Wegmann, Jr. and C. J. Bates, Civil Engineers. New York)
View all from this seller>