Proceedings of the Conference on Carpatho-Ruthenian Immigration, 8 June 1974 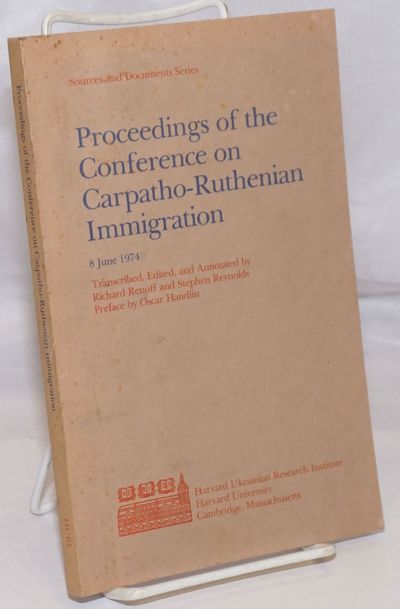 by Renoff, Richard and Stephen Reynolds, editors, transcribers and annotators; preface by Oscar Handlin
Cambridge: Harvard Ukrainian Research Institute, 1975. xxii, 111p., wraps, 5.5 x 8.5 inches, wraps worn and soiled, front wrap lightly foxed with a few small stains else good condition. Sources and Documents Series. The Carpatho-Ruthenian are "a Slavic people, most of whose ancestors migrated to the new world during the years 1880 to 1924. Inhabiting the region south of the Caprathian Mountains in present-day northeastern Czechoslavakia and the adjoining Trans-carpathian Oblast of the Soviet Ukraine, they had been subjects of the Hungarian Crown for nearly one thousand years" (Introduction). (Inventory #: 252668)
$40.00 add to cart or Buy Direct from Bolerium Books
Share this item