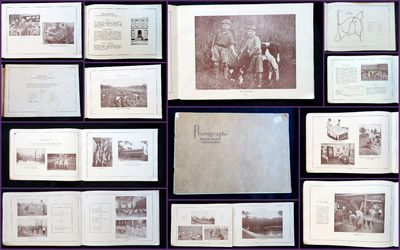 by Hope Farm
Verbank, NY, [1920]. General wear. Minor staining on first page. Front cover has small section missing on top left, as well as a section of missing surface litho. Three interior page is detached. Minor water stain. . Hope Farm was founded in 1906 as a "country community and school" located in Verbank, NY, were children, aged six to sixteen, who needed a home could stay. The majority of the kids at Hope Farm were sent there by various child welfare agencies.

The book is full of images from black and white photographs and information on the farm which has been divided up into five sections: 'Where They Live', 'Where They Learn', 'How They Play, 'The Plant', and 'Calendar of Events'. At the farm the children where separated by age and gender to live in a variety of houses on the property, such as the Memorial Cottage, Daisy Cottage, and Gate House. They provided education to the children as well, from first to tenth grade, in both traditional school work as well as vocational training and home economics. As the site also operated as a farm, the children learned about agriculture, often planting and harvesting the vegetables themselves, as well as taking care of the farm animals, cooking meals, and canning and preserving the fruits and vegetables for winter. There was also a variety of social activities for the children to engage in depending upon the season such as sports, band, skiing, sleigh riding, swimming flying kites, dances, theater, boating, fishing, and choir.

Along with the buildings needed for housing and schooling the children, Hope Farm also had a swimming pool, a canning shop, stores, a chapel, a library, infirmary, administration buildings, meat market, bakery, and shoe store. Additionally there was an office building in New York City, that could also house a limited amount of children, either for students furthering their education in the city or a short terms stays as alumni of Hope Farm looked for jobs. Each page has one to five photographs of the children, either at play or working on the farm. At the end of the book there is an illustrated map of the location of the farm in New York within the greater Hudson Valley. On the inside back cover is a blank donation form. 64 pgs. Hope Farm itself was founded by David Hummell Greer, a former Protestant Episcopal Bishop of New York. It was renamed Greer School in 1939, and eventually the Greer-Woodycrest Children's Services which existed at least until the 1980s when they received several Haitian child refugees. The property now is the site of The Fountains at Millbrook, a retirement community. Brown wrappers. Staple bindings. OCLC 1 (Mar 2020). Measures 10"x 7" (Inventory #: 28001447)
$125.00 add to cart or Buy Direct from Eclectibles
Share this item