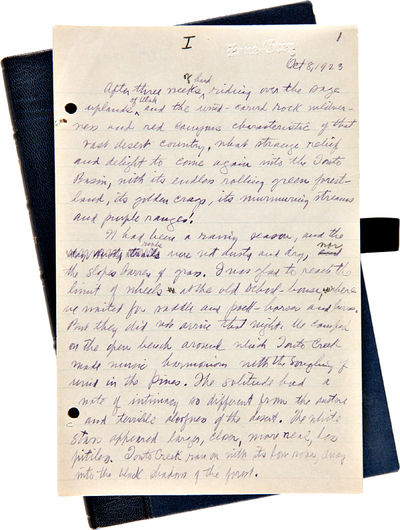 by Grey, Zane
[N.p.], 1923. 71,17pp. written in purple ink on the rectos of ruled paper, 8 1/2 x 5 1/2 inches (last dozen leaves in pencil); with corrections in the author's hand and in pencil in the hand of his wife, Dolly. With envelope, docketed in pencil: "Tonto Bear Original MS." First leaf with blind stamp of Zane Grey. Minor edge wear. Near fine. In a cloth chemise and half morocco and cloth slipcase, spine gilt. Zane Grey's stirring account of a bear hunting expedition into the Tonto Basin country of Arizona, the setting of a large portion of TALES OF LONELY TRAILS, which had been published the preceding year. This story was published in the March 1, 1924 issue of COUNTRY GENTLEMAN magazine. The text begins, "After three weeks of hard riding over the sage uplands of Utah and the wind-carved rock wilderness and red canyons characteristic of that vast desert country, what strange relief and delight to come again into the Tonto Basin, with its endless rolling green forest-land, its golden crags, its murmuring streams and purple ranges!" The manuscript shows many corrections and cross-outs, demonstrating Grey's writing and revision methods. The final seventeen-page section is designated as chapter four, which appears to be incomplete. Grey knew Arizona well, he built a lodge in the Tonto Basin in 1920 and returned there frequently to hunt, especially bears (an annual occurrence). He often had conflicting feelings toward the state, complaining that it was being overrun by tourists, and resenting that local authorities would not let him hunt out of season. (Inventory #: WRCAM54754)
$5,000.00 add to cart or Buy Direct from
William Reese Co. - Americana
Share this item