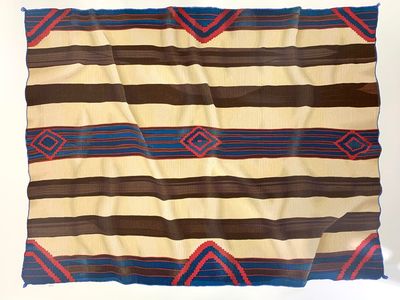 by Silverman, Jack
New with no dust jacket. 1984. Serigraph. 29 1/2 x 41 1/2 inch serigraph on Arches 140 pound moulded paper. Print is numbered (76 of 100) but not signed. In this superb example, the bold design and restrained size of the diamonds strikes an elegant balance with the striped field. The result is an icon of the 19th century Navajo Third Phase Chief Blanket weaving. This serigraph is the result 65 to 100 screen applications on Arches handmade paper. In speaking with the artist, he explained how he perfected his printing craft by adding layer after layer until he felt he had the richness and depth he was after. He was particularly proud of achieving the three-dimensional feel to his serigraphs. Each ripple and fold in the blanket is tangible and unique. One can actually 'feel' the multiple layers of ink on these masterpieces. During the second half of the 19th century, the primary market for Navajo blankets shifted from other Native American tribes to Anglo-Americans. While Native Americans had preferred Navajo Blankets featuring simple arrangements of horizontal stripes, Anglo Americans found the relative simplicity of first and second phase chief's blankets uninspiring, Anglo Americans also preferred bordered compositions to unbordered compositions, probably because most Oriental carpets featured bordered compositions. In response to the Anglo American preferences, Navajo weavers introduced the concentric diamond to their chief's blankets. The chief's blanket's traditional, horizontally striped field was decorated by the arrangement of a full central diamond surrounded by eight partial diamonds. This gave the chief's blanket a focal point, and the suggestion of a border. Almost overnight, the diamond pattern (or third phase" pattern, as it is more commonly known) became extremely popular among Anglo American tourists, settlers, military personnel and merchants throughout the Americana west. ; Serigraph; 24" x 36" . (Inventory #: 021484)
$450.00 add to cart Available from
Back of Beyond Books
Share this item