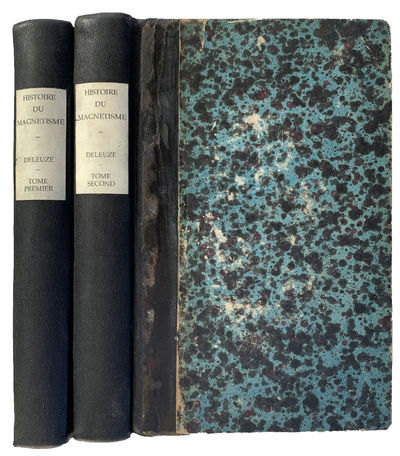 by DELEUZE, Joseph Philippe Francois (1753-1835).
Paris:: Chez Belin-Leprieur, 1819., 1819. Second Edition. Two volumes. 8vo. [4], xiv, [2], 316; [4], 362 pp. Scattered foxing throughout, not diminishing legibility. Extremely infrequent contemporary ink notations, especially a page of notes at p. 356, Vol. II, in an unknown hand. Quarter black leather over blue marbled paper-backed boards; bindings carefully repaired. Near fine. Deleuze (1753-1835), a prominent member of the "Mesmer movement," discusses in this work "aspects such as the magnetic fluid, healing, problems and dangers of mesmerism, and personally observed phenomena" (Alvarado 116). "Deluze [sic] is a central figure in the history of animal magnetism. . . He was impressed with the demonstration (of somnambulism) and began to pursue his own study of animal magnetism. . . The Histoire is Deluze's first work on animal magnetism and is one of the most important ever written on the subject. . . The Histoire is about as balanced a treatment as one could find from a man who was engaged in a daily practice of that art" (Crabtree 267). / An excerpt (trans.): "The magnetiser can communicate his fluid to many objects, and these objects become either the conductors of his action, or proper instruments of its transmission, and produce magnetic effects upon persons with whom he is in communication" (Deleuze 212 in Alvarado 121). REFERENCES: Alvarado, Carlos S. "MESMERISM ONLINE: A BIBLIOGRAPHIC REVIEW." Australian Journal of Clinical and Experimental Hypnosis. 36.2 (2008): 115-29; Crabtree, Adam. Animal Magnetism, Early Hypnotism and Psychical Research, 1766-1925. White Plains, NY: Kraus International, 1988; Crabtree 243 (1818 edition); Caillet 2933; Tinterow, Maurice M., Foundations of hypnosis From Mesmer To Freud, (1970), p. 575. (Inventory #: SS11081)
$275.00 add to cart Available from
Jeff Weber Rare Books
Share this item