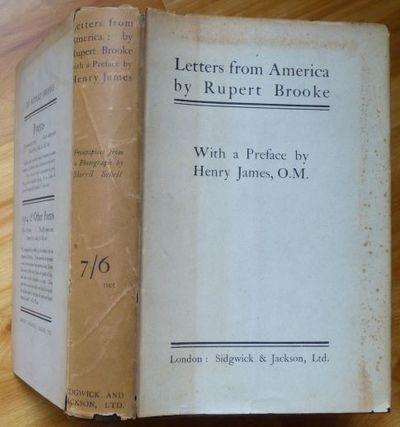 by Brooke, Rupert
1916. London: Sidgwick & Jackson, 1916. Original black cloth with printed spine label, with dust jacket. First English Edition, published about five weeks after the American (for copyright reasons). After Brooke suffered a mental breakdown in 1913, he traveled extensively -- from May 1913 to June 1914 -- to America, Canada, and on to the South Seas. (Upon his return to England, he enlisted in the Royal Navy, and in April 1915 died of blood poisoning aboard ship in the Aegean, en route to Gallipoli. On his trip to North America he had submitted his impressions to the Westminster Gazette -- which were here published posthumously by his Rugby schoolmate Frank Sidgwick. The final chapter, really an eight-page post-script, is Brooke's attempt to put into writing his initial thoughts on the August 1914 declaration of war. Included is a 34-page Preface (and biography) by Henry James -- who, it turned out, died just nine days before this English edition was published. This copy is in the primary black buckram; there are later copies (printed on lighter-weight stock) in navy blue cloth. In this copy, both spine labels (the one on the spine and the "spare" tipped to the last page of text) are properly dated 1916; although all copies have the spare label properly dated, the spine label of some copies is dated 1915 with a hand-stamped "6" to correct it. (The book was delayed into early 1916 due to James's illness.) E&L avers that both the altered-1915 labels and the 1916 labels were affixed by the binder *simultaneously* (E&L's italics) -- thus neither state precedes the other. The volume is in just-about-fine condition (no wear, but a little faint fading); the 1916 jacket -- which is quite scarce -- is very good (browned on the spine, with minor wear and foxing). Keynes (Brooke) 42; Edel & Laurence (James) B36b. Bookplate of David C. Titus. (Inventory #: 14542)
$325.00 add to cart or Buy Direct from
Sumner & Stillman
Share this item