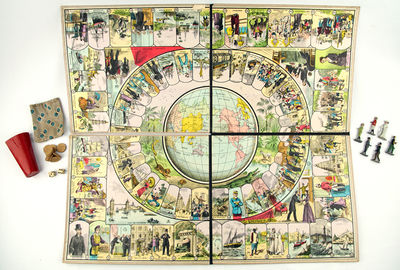 by Verne, Jules
Paris: Les Jouets et Jeux Français, 1895. A board game for up to six players, following the eighty-day journey of Phileas Phogg across the globe. Each day is represented by a square on the board, centering around a globe. Some squares show notable characters, such as Phogg, Francis Cromarty, and Miss Aouda, while others show ships, animals, and landmarks from destinations as far as Calcutta, Hong Kong, and San Francisco. Some squares have particular associated functions, which are outlined in the rules on the underside of the box lid. The course of play proceeds through a series of transactions using the fifteen tokens provided, with one player acting as Phogg's valet, Passepartout, who takes on the role of banker. The tokens are housed in a cloth bag. Six painted metal figures act as gamepieces, housed in a smaller box, with splits to corners of lid. Paper cup holding two dice, along with tokens and game pieces, contained in separate compartments in the box. Some soiling to back of game board. All elements stored in box with lush pictorial lid, some signs of repair, else a near fine and remarkably intact set. (Inventory #: 30083)
$3,500.00 add to cart or Buy Direct from
Bromer Booksellers
Share this item

Mark Twain's Raft Passage: From Life on the Mississippi

(Mill Valley, CA) : SUNFLOWER PRESS , 1986
(click for more details about Mark Twain's Raft Passage: From Life on the Mississippi)
View all from this seller>