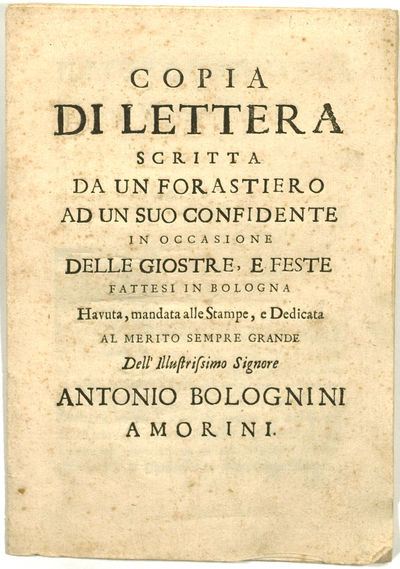 8vo. Unbound. 14pp including leaf of title, verso blank; 2p dedication to Sig. Padron Colendiss; pp 5-13 text; 1p blank. Collation; A8. Not in OCLC! Not in KVK, not in Watanbe -O'Kelly.
Copia di Lettera is a detailed pamphlet describing the masquerade, carousel and other elements of the carnival of 1710 in Bologna. The event took place during four days beginning on Sunday 23 February 1710. Of interest are many place names of Bologna in 1710, which have been changed over time, including the names of streets, roads, alleys, plazas and squares, public and private places of Bologna inside the beltway.
The author, identified only as "N.N", is a visitor to the city. He describes the entire event as unparallel in all of Italy with its masquerades, private dancing parties, musical theatre, private comedies by the Jesuits, carriages with triumphal wagons and much else. Finally the public feast is described with chocolates (still a rare treat at this time) exotic cakes, flowers and citrus fruits and many other refreshments. The detailed account describes the decoration of the central square with its theatre and pavilion and also its fences surrounding the pavilion of the Archbishop. The carrousel (horse parade) is described with the livery of those on horseback, including the Swiss Guards and the sumptuous dress of the nobility.
Most interesting is the description of the crowd who gathered behind the fences who wore all varieties of clothes with the jeweled hair of the women and feathers and gold & silver. The chaos caused an "admirable confusion" where one could not determine who was a person of distinction and who was not. The pamphlet does list many of the notables involved with the carnival including Archbishop Boncompagno, the legates, the counts and cavaliers, the field marshals and marquis and others who were in masquerade costume but identified. Since the dedicatee of this letter is one Antonio Bolognini Amorini. (Bologna, 7 febbraio 1767 – Bologna, 18 giugno 1845?) it is possible the letter was published in the later part of the 18th century (Inventory #: 983838)
$850.00 add to cart Available from Golden Legend
Share this item
Golden Legend, Inc.
Offered by