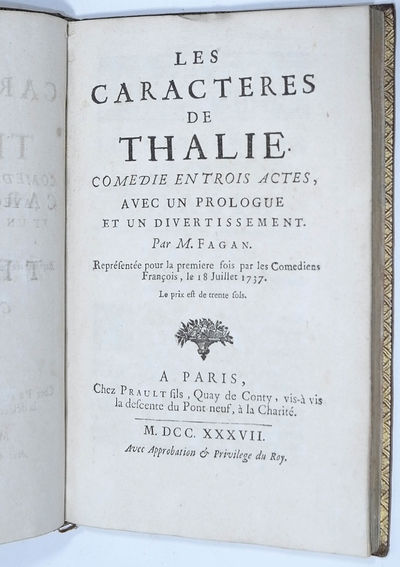 A forgotten playwright who ought to be remembered

Les Caracteres de Thalie consists of three one act plays l'Inquiet, l'Etourderie, Les Originauxeach with a different structure and theme, each played together to form a complete work. Theplay was performed at Theatre de la rue des Fosses Saint-Germain Paris in July of 1737 andChateau de Fontainebleau in October.
Fagan was particularly interested in the structure and effects of drama. Les Caracteres de Thalie is an experiment composed of a prologue followed by three short plays each of a different genre in order to present the different types of comedy then popular on the Parisian stage. It consists of a comedy of characters l'Inquiet; of Intrigue l'Etourderie*; and of Episode Les Originaux.** According to notes in the BnF's record of Fagan's plays, Les Caracteres de Thalie reflects an ingenious and innovative idea to assemble the different kinds of comedy into a unified whole, introduced by a Prologue. With a comfortable position in a government office, Fagan took a liking to theater and wrote some thirty plays presented mostly at Théâtre de la foire, Théâtre-Italien and Théâtre-Français.He had the germ of genius for comedy, but according to Godefroy (IIp.245) his laziness, his melancholy indifference, and his taste for easy pleasures, prevented his further development. Nevertheless, he was important in his time. Fagan was influential and celebrated even by Voltaire who thought Fagan's La Pupille, 1734, was the "most complete petite pièce on the French stage." (Knight p.171). David Garrick wrote The Guardian (1759) a two act comedy adapted from Fagan's La Pupille which, according to Knight "just misses the tenderness of the original."
*l'Etourderie was the only one of the three plays to be restaged after 1737.
**According to Godefroy (ibid), Les Originaux, was Fagan's best prose comedy, a remarkablespecimen of what is called episodic comedy or drama, a genre that excludes all action andconsists only of a series of unconnected tirades or scenes.Ref: Godefroy. Frédéric. Histoire de la littérature française, depuis le XVIe siècle jusqu'à nos joursVol II. Paris Gaume, 1876 (Inventory #: 983839)
$1,500.00 add to cart Available from Golden Legend
Share this item
Golden Legend, Inc.
Offered by