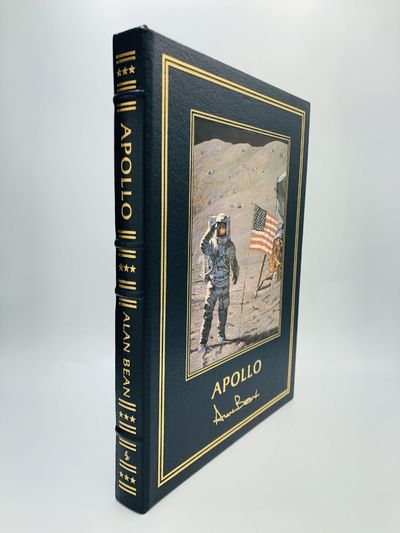 by Bean, Alan with Andrew Chaikin
Norwalk, Connecticut: The Easton Press, 1999. Hardcover. Fine. Collector's Edition, #779 of 3,000 copies signed by Alan Bean and accompanied by a Certificate of Authenticity and printed note from the publisher. With the descent of the lunar lander Intrepid, Apollo 12 astronaut Alan Bean (1932-2018) became the fourth man to walk on the moon. Since his retirement from NASA in 1981, Bean has devoted himself to his realist paintings; this handsome volume allows him to display both his artistic skills and his orbital experience, reproducing dozens of Bean's paintings of lunar surfaces, moonwalks, astronaut gear and so on, alongside a blow-by-blow narrative of Apollo 12, which Chaikin has written very much from Bean's perspective. Introduction by Senator John Glenn. Colorfully illustrated throughout. Quarto. Full blue leather binding, with a color image inset on the front, elaborate gilt stamping, four raised bands, moire silk endpapers, and a ribbon marker. A fine copy. (Inventory #: 70761)
$400.00 add to cart Available from Johnson
Share this item